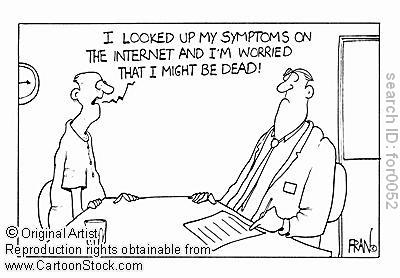 What is Hypochondria or Cyberchondria?

Hypochondria is a very real condition for many people. It is a mental disorder experienced by both men and women where the sufferer believes that they are experiencing medical illness, whether real or imagined. They also believe that the symptoms they have are attributable to serious medical ailments. Hypochondria can lead to severe anxiety and depression in the sufferer.

The symptoms of hypochondria usually follow a familiar pattern. The sufferer will develop an overpowering fear of a particular illness or illnesses. Often the fear is out of proportion with the illness or based on non-existent symptoms. The reasoned opinion of physicians and other medical experts often do not help in controlling the fear.

A main symptom of hypochondria is the misdiagnosis of any slight ailment. The fear that hypochondria exerts is so great that any small ache or pain is treated as a major illness. The hypochondriac will think that the smallest pain can be attributed to major illness such as cancer or AIDS. In a sense, the hypochondriac believes the worst and usually cannot be dissuaded by contrary expert opinion.

The worries of the hypochondriac can have severe ramifications in daily life. The hypochondriac may spend a lot of time away from work worrying about his or her imagined ill health. Anxiety levels increase due to this incessant worry, and can create other illnesses such as panic attacks and depression.

Many physical symptoms of illness can be triggered by hypochondria. Psycho-somatic symptoms may also be found in the condition. Many hypochondriacs are seriously concerned with their own death due to the condition, and many begin to make preparations for their death.

Another symptom of hypochondria is an obsessive need for information on diseases and illnesses. The hypochondriac will usually not believe the diagnoses of doctors and will try to find his or her own diagnosis of the perceived illness. Hypochondriacs spend a great a deal of the day worrying about and discussing their symptoms.

Hypochondria affects at least 6% of people. Many people believe that bad posture is an explanation for hypochondria. The word hypochondria comes from Greek words meaning “below” and “the ribs”. Hypochondria is a psychological problem that only professional treatment can cure.

Thanks to the Internet, becoming a hypochondriac is much easier than it used to be.

The easy availability of health information on the web has certainly helped countless people make educated decisions about their health and medical treatment, but it can be disastrous for people who are likely to worry. Hypochondriacs researching an illness used to have to scour books and ask doctors for information. Now a universe of information is available with a few mouse clicks.

“For hypochondriacs, the Internet has absolutely changed things for the worse,” says Brian Fallon, MD, professor of psychiatry at Columbia University and the co-author of Phantom Illness: Recognizing, Understanding and Overcoming Hypochondria (1996).

So far, no studies have been conducted on just how hypochondriacs use the Internet, Fallon says. But the phenomenon is common enough to have a snappy name — “cyberchondria.”

The medical condition called hypochondriasis is defined as worry over an imagined illness with exaggeration of symptoms, no matter how insignificant, that lasts for at least six months and causes significant distress. It tends to develop in the 20s or 30s, and it affects men and women equally. It sometimes comes on following the illness of a friend or family member, and it can also occur as a secondary illness to depression or generalized anxiety disorder.

Although it’s often seen as harmless, sufferers know that it can shift from a quirky, neurotic character trait into a devastating obsession.

“Illness often becomes a central part of a hypochondriac’s identity,” says Arthur Barsky, MD, of Harvard Medical School and the author of Worried Sick: Our Troubled Quest for Wellness (1988). As a result, a hypochondriac’s work and relationships suffer. And those with the condition aren’t the only ones who pay the price: According to Fallon, hypochondria costs billions of dollars a year in unnecessary medical tests and treatments.

Contrary to what some skeptics think, hypochondriacs are not pretending or just trying to get attention. “They’re absolutely not fakers or malingerers,” says Barsky. “They really feel the distress they’re talking about. It’s just that their feelings don’t have an obvious medical basis.”

“What hypochondriacs have trouble accepting is that normal, healthy people have symptoms,” says Barsky. Hypochondriacs tend to be very aware of bodily sensations that most people live with and ignore. To a hypochondriac, an upset stomach becomes a sign of cancer and a headache can only mean a brain tumor. The stress that goes along with this worry can make the symptoms even worse.

Web Can Be Misleading

Hypochondriacs are often not particularly careful about where they get their health information. To many sufferers, Gray’s Anatomy, a half-remembered TV movie, and a harrowing health story about your hairdresser’s friend’s grandmother are all equally legitimate sources.

This can lead to serious trouble for hypochondriacs using the vast and unregulated web.

Web Can Be Misleading continued…

“A lot of the stuff on the Internet, especially on health-related bulletin boards, is pure impression and anecdote,” says Barsky, “and they just don’t have a lot of scientific validity.”

Even the most reputable health web sites with the most accurate information can cause trouble for the hypochondriac. “Hypochondriacs tend to latch onto diseases with common or ambiguous symptoms or that are hard to diagnose,” says Fallon. For example, illnesses such as HIV or lupus, and neurological disorders including multiple sclerosis can cause vague symptoms like fatigue, swollen glands, and strange physical sensations.

With symptoms as common as these, it’s easy for hypochondriacs to become convinced they’re sick.

Barsky and Fallon say hypochondria often breeds suspicion and distrust between a sufferer and his or her physician. Some doctors may be too quick to dismiss the worries of hypochondriacs, and hypochondriacs are likely to ruin relationships with good physicians by second-guessing them from the start.

Hypochondriacs may “get suspicious when their doctor doesn’t give them a referral or a test they ask for,” says Fallon. “They can feel like they’re not being listened to, and so they’ll go shopping for another doctor and wind up repeating the process.”

“The solution is not to get tested for everything all the time,” says Barsky, “since that feeling of relief doesn’t last anyway.” Instead, hypochondriacs need to learn to get help and change their way of thinking.

Treating hypochondria, once believed to be almost impossible to cure, has improved a lot in the last decade.

Fallon was a pioneer in using antidepressants like Prozac and Luvox to treat hypochondriacs.

Barsky has had great success in using the techniques of cognitive behavioral psychotherapy — persuading hypochondriacs to change their responses to anxieties and wean themselves off the behaviors that get them in trouble.

For instance, Barsky says, a hypochondriac needs to resist the compulsion to self-diagnose and to seek assurance from doctors and friends. The best one can do is to get regular medical treatment from a trustworthy doctor trust and to live a healthy life.

Fallon agrees: “In a loose sense, a hypochondriac becomes almost addicted to looking up information, examining himself, and getting reassurance from other people,” he says. “Checking just makes things worse.”

And what about using the Internet to look up that worrisome symptom? “If it’s just going to make you upset,” says Barsky. “Don’t do it.”

Posted in What Is? and tagged cyberchondria, hypochondria
← What Is Hyperkalemia?What is Hypoglycemia? →