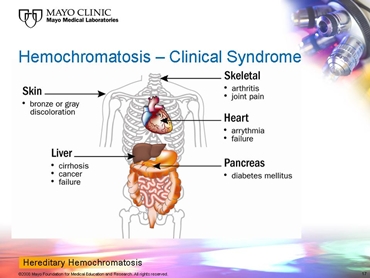 Hemochromatosis is a disorder of iron regulation – it is an inherited disease where excess “free” iron is deposited in various organs including the liver. It is ‘free’ because it is not bound tightly to carrier proteins which would otherwise prevent it from damaging cells.

The problem is that because of the chemical properties of iron, it cannot be broken down and eliminated from the body. Therefore this situation leads to iron overload in the body.

Many people believe that the body has a high requirement for dietary iron and think the more they eat the better their health will be. This is not so for everyone and is a very individual thing. Indeed the disease of iron overload is all too common and unfortunately remains grossly under diagnosed.

The abnormal regulation of iron absorption is believed to occur in the gut (duodenum). The excess iron accumulates over a long period of time. Early diagnosis is important as the iron excess is stored gradually over a lifetime, therefore the earlier detected the less chance of development of cirrhosis and liver cancer.

The condition tends to occur more commonly in men – this is likely to be due to the fact that women have monthly blood loss due to menstruation and lower intake of iron in the diet.

It is often a silent disorder that is commonly picked up in younger persons during routine blood work investigating other symptoms. However as iron slowly accumulates over the years other complaints may arise such as osteoarthritis and digestive complaints.

Biologically iron exists in two states Ferrous or Ferric. Free iron in its ferrous state is very toxic to living creatures. The presence of this excess iron creates unstable molecules called “free radicals”. It is these free radicals that damage cells and tissues which can lead to inflammation, scarring of the liver (cirrhosis), diabetes, spleen, pancreas, cardiac problems and cancerous cell changes.

An average person has around one gram of iron in their body, whereas a sufferer of hemochromatosis can store around twenty grams, enough to set off airport metal detectors in severe cases! The reason it is often not detected until permanent damage has already occurred, is because it may not produce any early symptoms, and when it does, the symptoms may be vague and diverse and attributed to other causes.

For example, when the disease is at its most treatable, sufferers are often teenagers, or in their 20s and 30s, and complain of fatigue, abdominal discomfort and aches and pains. These things may be mistaken for Chronic Fatigue Syndrome or viral illness. If the disease progresses undiagnosed, toxic iron levels will build up in the liver, pancreas, heart, skin and joints leading to severe damage in these organs.

In the late stages of untreated hemochromatosis a sufferer has a 200- fold higher risk of liver cancer than a normal person does and the only option is a liver transplant.

How do you get this disease?

Hemochromatosis is an inherited condition. This means it is passed on down a family line. Similar to blond hair or blue eyes. The disease may be passed on when 2 people who are carriers of the gene for the condition have a child. There is then a chance that this child may have an active form of the disease.

The parents and any unaffected children are carriers of only one gene and will not generally develop problems related to excess storage of iron, however they may still have the tendency and should still implement preventative nutritional strategies to protect the liver.

Who should be tested for this condition?

If you have been diagnosed with this condition it is wise to have your blood relatives screened – and your spouse if you plan to have children. Hemochromatosis affects those of Celtic, Anglo and Nordic origins and is most common in those of strong Irish descent. It affects as many as 1 in 200 Caucasians.

It is now considered to be the most common genetic disorder and close to 24 million people worldwide may be at risk of this severe disease. Hemochromatosis is a silent killer and creeps up on unwitting sufferers causing severe organ damage. This damage is easily prevented and treated by the equivalent of the old fashioned leech treatment involving draining of blood, provided it is detected early enough. It is detected easily and inexpensively with a simple blood test called “serum iron studies”.

It is so easy to diagnose that some have dubbed this disease “a diagnosis waiting to be made”.

Treatment of hemochromatosis consists of venesections (removal of blood, similar to a blood donation). Venesection prolongs the life and may assist in reversal and prevention of tissue damage. The amount of iron overload that you have will regulate how often you will have a venesection, but treatment is usually weekly for at least 18 months, with life-long follow-up.

A letter from a gentleman in Victoria, Australia:

Since my original contact as a hemochromatosis sufferer I am now a member of the Hemochromatosis Society of Australia Support Group. I am very motivated to promote awareness and early detection of this disease. Hemochromatosis is manageable when detected early but usually by the time symptoms become evident, severe organ damage has already occurred. With 1 in 10 of the population being a carrier, and 1 in every 200 to 300 being a sufferer, a significant percentage of the population are at risk.

For example with a population of 80,000 in Ballarat City, and a regional population above 100,000, there is the probability of over 300 cases of hemochromatosis within reach. Unfortunately, statistics have shown that only 10% of cases have been detected.

The chance to alert and detect these cases before serious damage sets in, is a very attractive course to follow. If you are able to raise awareness in your area of influence, and lead even one sufferer to an earlier diagnosis, then very good works will have been achieved.

What are the symptoms of Hemochromatosis?

Bronzed coloration to the skin (due to melanin deposition)

The triad of bronze skin, enlarged liver and diabetes mellitus is only present in cases of gross iron overload.

Hemochromatosis can lead to a dysfunctional liver that is most likely a little inflammed – and very possibly fatty due to the high iron levels stressing this important organ. The course of the disease depends on a number of factors including gender, dietary iron intake, presence of associated hepatotoxins (especially alcohol).

The test used to diagnose hemochromatosis is the HFE gene analysis for C282Y mutation. This requires a blood sample.

How do we reduce free radical production?

Free radicals are ‘mopped up’ and put out of action by ‘antioxidants’. These powerful protectors of the cells are found in fresh fruits and vegetables. They can also be obtained in therapeutic amounts from supplements.

Minerals and vitamins with powerful antioxidant capabilities are Selenium and Natural Vitamin E. These two actually work together to provide excellent protection for cells.

Hemochromatosis is a genetic disorder so it is something that has to be managed. Sufferers should take care to avoid liver stress.

From a nutritional medicine standpoint – the aim is to support the liver function and provide protection to the liver cells from the free radicals generated.

Excerpt from “The Healthy Liver and Bowel Book”

Eating foods high in iron may worsen the disease but will not cause it, as the problem is a genetic disorder of iron metabolism. Indeed, iron is so widespread in foods that it is virtually impossible to avoid it and by trying to do this, you could develop nutritional deficiencies.

However, sufferers would be wise to avoid a regular intake of red meat and organ meats. Patients can enjoy a normal and varied diet, along the principles of The Liver Cleansing Diet, provided they have their blood removed regularly. They must be monitored with regular blood tests under the supervision of a specialist (hematologist).

One gentleman who suffered with liver damage caused by hemochromatosis called the Health Advisory Service to ask dietary questions. He had stopped all green leafy vegetables such as broccoli and spinach because they contain iron. This is not a good idea because these types of vegetables are very important for healthy liver function and help to heal and repair liver damage. Provided regular venesection (blood letting) is done, the excess iron in the blood can be removed efficiently.

Restricting the intake of fresh raw vegetables is not a good idea and will result in nutritional deficiencies and impaired liver function. Taking iron supplements can be very harmful in this disorder and it is important to check your blood levels of iron before committing to long term supplementation with iron tablets.

Treatment is life saving and consists of the regular removal of venous blood which is called venesection. Normal health and life expectancy can be achieved if the excess iron can be removed through regular venesection before organ damage has occurred.

It is a good idea to take antioxidant supplements to reduce free radical damage caused by excess iron. If there is liver damage, a natural liver tonic can help, but make sure that it does not contain any iron.

Follow the principles of eating outlined on pages 20-27 of “The Healthy Liver and Bowel Book” by Dr Cabot and make these principles a way of life.

Minimize the intake of foods which are especially high in iron – these include the offal meats – liver, heart and kidney and foods prepared from these such as pate, liverwurst & haggis. Also black pudding – which is made from pigs’ blood.

Oysters and mussels – especially raw oysters as these may carry the hepatitis A virus.

Some chocolate powder drinks are also fortified, along with sports drinks, and baby cereals and formulae. It is recommended that you do not consume either high dietary iron foods or iron fortified foods as part of your regular diet.

Use caution with alcohol – the recommended level is a maximum of 4 – 5 standard drinks a week.

For curry lovers it is advisable to avoid ‘balti’ curries cooked in traditional cast iron pots. These meals can contain more iron than the most iron rich foods such as liver.

If you want to improve liver function you should aim to limit sugar and refined carbohydrate foods such as white bread, pasta and white rice.

Limit chicken and turkey that is not free range as this contains artificial growth hormones, antibiotics and steroids that increase the liver’s workload.

“The Healthy Liver and Bowel Book” Follow the principles for a Healthy Liver outlined on p 20 – 27. This book is essential reading for anyone with liver dysfunction and contains sections on fatty liver, liver function tests, hemochromatosis and high cholesterol etc . These principles of eating need to be followed as a way of life.

“Raw Juices Can Save Your Life” an A-Z medical guide to raw juicing.

“The Ultimate Detox” This book will help you achieve healthy liver function and all recipes do not contain red meat.

The juices are vitally important as a source of powerful antioxidants. It is good to use both whole fruits and vegetables in the diet as well as the juices as the juices provide an easily absorbable form of nutraceuticals that are very beneficial for the liver.

Posted in What Is? and tagged hemochromatosis
← What is HCV (Hepatitis C Virus)?What is Hepatic Encephalopathy? →