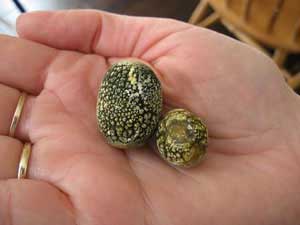 What is (are) Gallstones?

Gallstones are lumps or stones that develop in the gallbladder or bile duct. Some of the chemicals which exist in the gallbladder, such as cholesterol, calcium bilirubinate, and calcium carbonate, harden into either one large stone or many small ones. According to Medilexicon’s medical dictionary, a gallstone is “A concretion in the gallbladder or a bile duct, composed chiefly of a mixture of cholesterol, calcium bilirubinate, and calcium carbonate, occasionally as a pure stone composed of just one of these substances”. An article describes a gallbladder in the bile duct similar to trying to squeeze a golf ball through a straw.

It is estimated that about 20 million Americans have gallstones. A study revealed that the prevalence of gallstones in adults of industrialized countries is approximately 10% and is showing a tendency to rise.

In order to better understand what gallstones are, we need some information about the gallbladder and the bile ducts.

What is the gallbladder?

The gallbladder is a small sac located on the right-hand side of the body, on the underside of the liver. Gall (bile) is a greenish-brown liquid which the liver produces. Gall is stored and concentrated in the gallbladder. Gall goes into the small intestine via the bile ducts to facilitate the digestion, mainly of fats. Every time we eat some gall is released into the intestines. The bile duct is a narrow tube.

When the chemicals in the gallbladder, cholesterol, calcium bilirubinate, and calcium carbonate are out of balance gallstones may form. There are two main types of gallstones:

Cholesterol gallstones – these may form if there is too much cholesterol in the bile? They are the main type of gallstones in the UK and the USA.

Pigment gallstones – these form when the bile has too much bilirubin. They are more common among patients who have liver disease, infected bile tubes or blood disorders, such as sickle-cell anemia.

What are the symptoms of gallstones?

The majority of people with gallstones have no symptoms at all. This is because the stones generally stay in the gallbladder and cause no problems. Sometimes, however, gallstones may lead to cholecystitis (inflamed gallbladder). Symptoms of gallbladder inflammation include:

Pain on the right-hand side of the body, just below the ribs

Pain in the right shoulder

Biliary colic – Sometimes the gallstones may pass down through the bile duct into the duodenum. When this happens the patient may experience biliary colic – a painful condition. The pain is felt in the upper part of the abdomen, but can also exist in the center of the abdomen, or a little to the right of it. Pain is more common about an hour after eating, especially if the patient has had a high-fat meal. The pain will be constant and will last a few hours, and then subside. Some patients will have non-stop pain for 24 hours, while others may experiences waves of pain.

Pancreatitis – If a small gallstone passes through the bile duct and blocks the pancreatic duct, or causes a reflux of liquids and bile into the duct, the patient may develop pancreatitis.

Experts are not completely sure why some people develop a chemical imbalance in their gallbladder which causes gallstones, while others do not. However, we do know that gallstones are more common among:

Overweight/obese people, especially women. A study revealed that a bulging midriff almost doubles a woman’s chances of developing gallstones and the need for surgery to remove them. Women who have been pregnant

People who have recently lost lots of weight.

Intentionally losing weight and then regaining it may increase men’s risk for gallstones later in life.

People with a close relative who has had gallstones.

A study revealed that a gene variant significantly increases the risk of developing gallstones.

People whose intake of dietary fat is high.

Twice as many women get gallstones than men.

People over 60 years of age.

Hormone replacement therapy (HRT) for women during the menopause is linked to a higher risk of gallbladder problems. A study found that HRT administered by skin patches or gels poses a smaller risk than HRT given orally.

How are gallstones diagnosed?

A dye is either injected into the blood stream so that it concentrates into the bile ducts or gallbladder, or it is inserted straight into the bile ducts suing an endoscope (ERCP – endoscopic retrograde cholangiopancreatolography). The dye shows up on X-rays. ERCP is also used to locate and remove stones in the bile duct.

The doctor will then be able to look at the X-rays and identify possible gallbladder or bile duct disorders, such as pancreatitis, cancer of the pancreas, or gallstones. The X-rays will indicate to the doctor whether the dye is going to where it should go – i.e. the liver, bile ducts, intestines and gallbladder. If the dye does is not present in one of these areas it generally means that the gallstone is causing a blockage. An expert will have a better idea of where the gallstone is located.

This is a non-invasive X-ray that produces cross-section pictures of the inside of the human body.

A small amount of harmless radioactive material is injected into the patient. This is absorbed by the gallbladder, which is then stimulated to contract. This test may diagnose abnormal contractions of the gallbladder or an obstruction of the bile duct.

What is the treatment for gallstones?

The gallstones are only treated if they have caused gallbladder inflammation, blockage of the bile ducts, or if they have moved from the bile ducts into the intestines. Patients who are treated are generally put on a low fat diet.

Cholecystectomy means the surgical removal of the gallbladder. This is usually performed with keyhole surgery (minimally invasive surgery) – a small incision is made. However, sometimes keyhole surgery is not possible for about 10% of patients, who need open cholecystectomy. With open cholecystectomy a large cut is made in the patient’s abdomen. Patients who undergo open surgery require a longer hospital stay and recovery time. If a patient’s gallbladder is severely inflamed he/she will require open surgery.

A study found that using a robotic assistant to remove a patient’s gallbladder by key-hole surgery (laparoscopic cholecystectomy) is as safe as working with a human assistant.

The gallbladder can be removed by entering through the vagina, this article explains.

A study found that contrary to widespread belief, early cholecystectomy significantly reduces hospital stays in patients with mild to moderate gallstone pancreatitis with no increase in complications or mortality.

As approximately 1 in 4 patients who undergo cholecystectomy have gallstone recurrence within a year, many patients are given urosdeoxycholic acid (the acid found in bile). Urosdeoxycholic acid lowers the cholesterol content of bile, making it less likely that stones will form.

If the gallstone is made of cholesterol it can sometimes be slowly dissolved with ursodeoxycholic acid. This type of treatment, known as dissolution, may take up to 24 months to be effective. It is not as effective as surgery, but is sometimes the only choice for patients who cannot have a general anesthetic.

In some rare cases, when a patient cannot have surgery or ursodeoxycholic acid, he/she may undergo ERCP, which requires a local anesthetic. A flexible fiber-optic camera (endoscope) goes down the patient’s mouth, through his/her digestive system and into the gallbladder. An electrically heated wire widens the opening of the bile duct; the stones are removed or left to pass into the intestine.

Ultrasonic shock waves are aimed at the gallstones which break them up. If they become small enough they can then pass safely in the patients stools. This type of treatment is uncommon and is only ever used when there are few gallstones present.

If the bile duct or duodenum are blocked by gallstones the flow of digestive juices to the pancreas may be blocked, this can cause jaundice and acute pancreatitis. Treatment usually involves the surgical removal of the gallbladders.

If is common for people who have had their gallbladder removed to experience feelings of bloating and indigestion, especially when they have a high fat meal. Some may pass stools more often than before.

How can you prevent gallstones?

Many experts say that a diet low in fat and high in fruit and vegetables, including plenty of dietary fiber may help protect people from developing gallstones.

Controlling your bodyweight – not allowing yourself to become overweight/obese – may also help prevent the formation of gallstones. However, crash dieting and rapid weight loss are risk factors in the development of gallstones.

An animal study indicated that exercise can reduce the risk of developing gallstones.

Can we live without our gallbladder?

Fortunately, we can live without our gallbladder. The liver produces enough bile to digest a normal diet. If a person’s gallbladder is removed the bile reaches the small intestine from the liver via the hepatic ducts, rather than being stored in the gallbladder. A small proportion of patients who have had their gallbladder removed will experience softer and more frequent stools for a while because their bile flows into the small intestine more often.

Posted in What Is? and tagged biliary, gallstones
← Diets High in Fructose May Harm Liver in Some, Scientists WarnWhat is a hernia? →