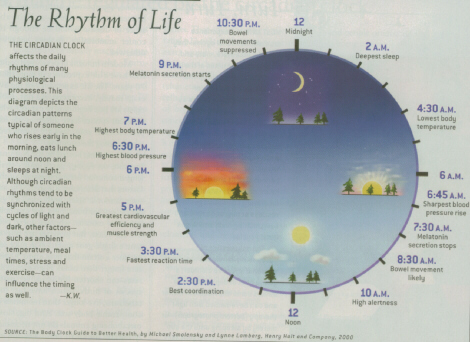 While most of us check the time throughout the day to stay on schedule, few realize that the liver also has a timed agenda. By heeding your liver’s innate clock, those with cirrhosis can help relieve some of the extra burden on this multitasking organ.

Cirrhosis is a worldwide problem, infecting the livers of millions people in the U.S. alone. As there is no cure for the disease it is important to make every effort to support their liver’s health by relieving it of unnecessary tasks. While there are a variety of strategies employed to support liver health, one that is often overlooked is working with the liver’s schedule.

In charge of a long list of life-sustaining functions, the liver is an extremely busy organ. A few of its crucial duties, include:

· Producing bile, which helps carry away waste and breaks down fats in the small intestine during digestion.

· Converting poisonous ammonia to urea (urea is an end product of protein metabolism and is excreted in the urine).

· Clearing the blood of drugs and other poisonous substances.

· Resisting infections by producing immune factors and removing bacteria from the bloodstream.

Not surprisingly, the liver can’t accomplish all of its amazing feats simultaneously. All of the body’s organs, including the liver, have periodic cycles where different functions are emphasized at different times.

The liver is no different, with a cycle completing every 24 hours.

Although scientists are just beginning to recognize the phases of the liver’s cycle, the following appear to describe the hepatic clock:

· The liver synthesizes complex chemicals and processes toxins the most when the production of bile is lowest.

· Along the same lines, chemical synthesis and toxin processing is lowest while the liver’s production of bile is highest.

· Because bile is needed for food processing, the liver makes a greater proportion during the day – and less at night.

· Bile production is assumed to be at its highest at 9am and lowest at 9pm.

· After 9pm, the liver switches to its other primary functions, synthesizing chemicals and processing accumulated toxins.

· The cycle begins shifting around 3am, when the liver slows chemical synthesis and readies itself for bile production.

Thus, the liver is most prepared to aid digestion with its synthesis of bile between 9am and 9pm. This is important information for those with cirrhosis who want to work with – and not against their liver.

Practical Application of the Liver Clock

Although our busy lifestyles often dictate when we eat and when we sleep, those with cirrhosis could benefit from scheduling necessities around their liver’s needs. Since bile production is down late at night, eating a big meal past 9pm puts an additional strain on the liver. Thus, experts advise eating the last meal of the day long before the nine o’clock hour.

In addition, the liver’s schedule of producing chemicals and detoxification (crucial for liver health) is best accomplished without additional demands. For this reason, most experts suggest retiring for the night close to 9pm whenever possible. Although this seems extremely early for many adults, those who try it report achieving a deeper and more restful sleep.

The liver’s clock may not mesh with a modern, busy schedule. However, eating early and going to bed early cooperates with your liver’s natural rhythm. By taking small steps to conform to your liver’s cycle, those with cirrhosis can remove the extra challenge that multitasking can place on their liver.

http://www.healthsystem.virginia.edu/uvahealth/adult_liver/liver.cfm, The Liver: Anatomy and Functions, Retrieved September 21, 2009, The University of Virginia, 2009.

Posted in Looking After Your Liver and tagged circadian, clock, liver, sleep
← Ten Liver-Friendly Tips For Repelling MosquitoesBlood Viscosity as a Factor in all Metabolic Diseases →