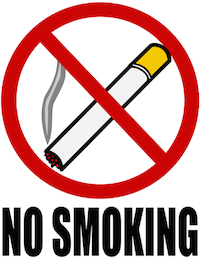 Smoking with Liver Disease – A No-No

In patients who have chronic liver disease that is due to alcohol or viruses, the damage to the liver is primarily caused by the alcohol or virus. However, other factors can modify, or aggravate, the amount of liver damage. An interesting study published in the July issue of the journal, Hepatology, focused specifically on the effect that smoking cigarettes has on the liver damage caused by a common chronic liver disease, hepatitis C.

They found that current and former smokers had more inflammation and scarring of their livers than did nonsmokers. This finding could not be explained by other factors, such as concurrent alcohol use, that are known to aggravate the inflammation and scarring in hepatitis C. The authors concluded that patients with chronic hepatitis C should be informed that smoking cigarettes could worsen their liver disease.

Chronic hepatitis C can seriously damage the liver. Any study that suggests a way of lessening the damage is potentially important. As always, however, the question must be asked, how well does the study support the conclusions? How strong is the association between smoking cigarettes and greater liver damage? As we have done several times in other articles, let’s look critically at the study.

The study was published in a first tier journal and authors are well-known and respected in the field of liver disease. However, the design of the study, referred to as an observational study, is not the strongest.

In observational studies, observations are madein this case, a history of smoking and examination of liver biopsiesand then associations are looked for among the observations. Although this is a good way of looking for relationships between observations, it is a weak method for determining cause and effect.

For example, the authors suggest, on the basis of the association they found, that smoking cigarettes worsens the liver damage. The same association might also occur if patients with more severe liver disease are more likely to smoke!

A type of study that offers the strongest support for a causal association between two observations is called an interventional study. For example, patients who havechronic hepatitis C on a liver biopsy could be randomly assigned to smoke or not smoke, and then additional biopsies could be examined at a later time.

Is there another type of study that could be done to more strongly support the association and a causative relationship between cigarettes and greater liver damage? A controlled, prospective study might be feasible. For example, biopsies could be done in smokers and nonsmokers (control biopsies), and the biopsies could be repeated at a future time.

What do I conclude? I would feel more comfortable if there were a better-designed study to more strongly support the hypothesis that smoking cigarettes damages the liver in patients with chronic liver disease. Until such a study appears, however, I believe there is enough support to advise patients with chronic liver disease to refrain from smoking.

Posted in Looking After Your Liver and tagged liver disease, smoking
← Paracetamol may cause liver damage even at recommended dosagesSpring Allergies and Liver Wellnes →