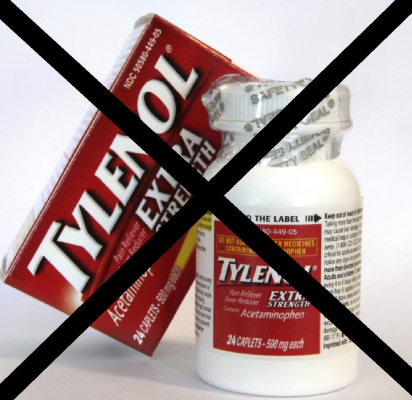 Paracetamol may cause liver damage (and can KILL)

If you take Tylenol for four days as directed you may be at risk of liver damage, says a new study. Tylenol has been on the market for 20 years. Previous studies had shown that Tylenol in combination with hydrocodone caused liver damage – experts had thought the liver toxicity was associated with hydrocodone. This new study clearly shows that the Tylenol poses the risk, rather than the hydrocodone.

Researchers from the University of North Carolina, Chapel Hill, USA, were surprised when they found out that the liver damage had nothing to do with the opiate (hydrocodone). They found a previously unrecognized but pretty remarkable effect of acetaminophen (Tylenol) alone when taken as directed for four days.

It’s well known that overdoses of the non-opiate analgesic paracetamol are the leading cause of liver failure, but the fact that it will even cause liver damage at recommended doses is remarkable. The danger is exacerbated because opiates (e.g. codeine) and anti-tussives (e.g. DXM) are unnecessarily bundled with paracetamol in over the counter and prescription medicine and unwitting consumers can mistakenly take two or more medications containing paracetamol. Why are combination preparations so common? I don’t know, but I suspect it’s to avoid selling potential substances of abuse in a pure form. New Scientist: ‘Safe’ painkiller is leading cause of liver failure

POPULAR over-the-counter painkiller is now the leading cause of acute liver failure in the US – and almost half of those cases are accidental overdoses.

Paracetamol (or acetaminophen as it is known in the US) is used by millions of Americans each year, and is commonly thought to be safe. Until 1980, paracetamol was not even listed as a cause of acute liver failure. But between 1998 and 2003, the proportion of cases of liver failure caused by the drug nearly doubled.

William Lee at the University of Texas Southwestern Medical Center in Dallas and his colleagues followed patients with acute liver failure who were in a coma. Of the 275 people with paracetamol poisoning, 8 per cent received a liver transplant, 65 per cent survived without one and 27 per cent died.

Counterpunch — The Big Bucks in Tylenol:

More Americans probably fear aspirin as a cause of Reye’s syndrome than fear acetaminophen as a cause of severe liver damage. Yet, as discussed in a previous column there are approximately 2,000 cases of acute liver failure annually in this country, resulting in about 500 deaths. Acetaminophen overdose is the leading cause for calls to Poison Control Centers (133,000 in ’04, more than half required a trip to the ER or doctor’s office). The mechanism of action is not mysterious: the liver, as it breaks down acetaminophen, makes a toxic compound, N-acetyl-para-benzoquinoneimine, which is then transformed to a benign one. In cases of overdose, the liver can’t fully process the toxin, which accumulates. For those with liver damage from hepatitis and/or heavy alcohol use, a “therapeutic” dose can lead to acute failure. Recently Dr. William Lee presented data at a conference showing that one in eight cases of acute liver failure attributed to hepatitis B also involves acetaminophen poisoning.

Your correspondent asked Dr. Lee why manufacturers combine -“bundle”- acetaminophen with synthetic opiates, as in Percocet and Vicodin. (Tylenol with codeine is ubiquitous, while most U.S. pharmacies don’t even stock aspirin with codeine.) Lee replied, “The point of the bundling from the physician’s standpoint is that you do not need a triplicate form to fill in which most of us use very rarely -have, but keep in a bottom drawer and (like me yesterday) cannot find… when we are on the run and trying to get someone relief.

These compounds are the only ones that can be called in and written on a plain scrip. Not sure how it got enacted, however.” If the rationale for making the acetaminophen-opioid drugs available by “plain scrip” is regulatory rather than medical, we suspect that J&J lobbyists had a hand in establishing it. This is not a conspiracy theory, it’s a conspiracy hypothesis. There are people in DC who should be able to substantiate or disprove it. The question is: which lobbyists working for which corporations fixed which codes so that “bundling” drugs would facilitate prescription writing?

In America, codeine is a Schedule II controlled substance for pain-relief products containing codeine alone. In combination with aspirin or paracetamol it is listed as Schedule III. 1

In Australia, codeine is only available over the counter bundled with paracetamol. Interestingly, I’ve been looking at the Australian Pharmaceutical Benefits Scheme schedule and codeine phosphate is actually more expensive to buy than codeine bundled with paracetamol, and a larger quantity (60 instead of 20) is available for the bundled version. Paracetamol is also designated for various chronic conditions (e.g. arthropathies and palliative use).

It seems the regulatory authorities would rather have people die of liver failure than allow consumers access to opiates in pure form without a prescription. A destructive and futile measure, considering most drug abusers are probably familiar with the cold water separation technique.

Posted in Looking After Your Liver and tagged cirrhosis, pain management, paracetamol, tylenol
← Medical Marijuana, Alcoholism and Your LiverSmoking with Liver Disease – A No-No →