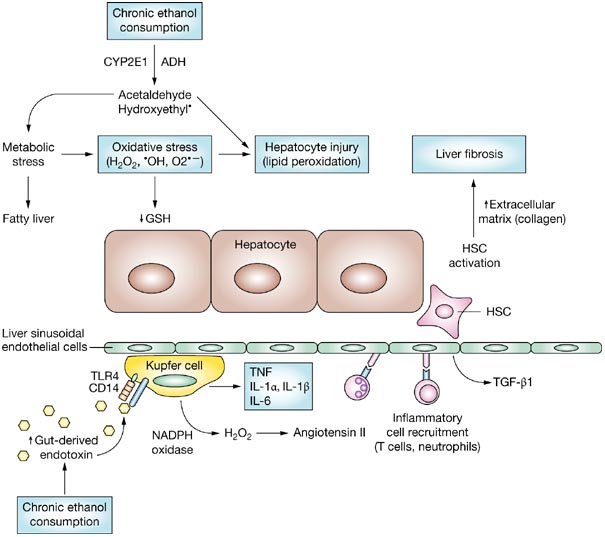 The liver is one of the largest and most complex organs in the body. It stores vital energy and nutrients, manufactures proteins and enzymes necessary for good health, protects the body from disease, and breaks down (or metabolizes) and helps remove harmful toxins, like alcohol, from the body.

The liver is able to perform these tasks because millions of cells work as a team around the clock. Everything that enters the body through the mouth is digested in the stomach and intestines.

These raw materials then enter the liver factory through the bloodstream and the worker liver cells break them down, purify them, make useful products, and get rid of harmful products.

Because the liver is the chief organ responsible for metabolizing alcohol, it is especially vulnerable to alcohol-related injury. Even as few as three drinks at one time may have toxic effects on the liver when combined with certain over-the-counter medications, such as those containing acetaminophen.

From Steatosis to Cirrhosis

Steatosis is marked by an excessive buildup of fat inside liver cells. This condition can be reversed, however, when drinking stops.

Drinking heavily for longer periods may lead to a more severe, and potentially fatal condition, alcoholic hepatitis-an inflammation of the liver. Symptoms include nausea, lack of appetite, vomiting, fever, abdominal pain and tenderness, jaundice, and, sometimes, mental confusion. Scientists believe that if drinking continues, in some patients this inflammation eventually leads to alcoholic cirrhosis, in which healthy liver cells are replaced by scar tissue (fibrosis), leaving the liver unable to perform its vital functions.

Other factors besides alcohol also may influence ALD development, including demographic and biological factors such as ethnic and racial background, gender, age, education, income, employment, and a family history of drinking problems.

Women are at higher risk than men for developing cirrhosis. This higher risk may be the result of differences in the way alcohol is absorbed and broken down. When a woman drinks, the alcohol in her bloodstream reaches a higher level than a man’s even if both are drinking the same amount. The chemicals involved in breaking down alcohol also differ between men and women.

For example, women’s stomachs may contain less of a key enzyme (alcohol dehydrogenase) needed for the initial breakdown of alcohol. This means that a woman breaks down alcohol at a slower rate, exposing her liver to higher blood alcohol concentrations for longer periods of time-a situation that is potentially toxic to the liver. Differences in how a woman’s body breaks down and removes alcohol also may be linked to how much and how often she drinks, the fact that estrogen is present in her body, and even her liver size.

Diagnosing ALD is a challenge. A history of heavy alcohol use along with certain physical signs and positive laboratory tests for liver disease are the best indicators of disease. Alcohol dependence is not necessarily a prerequisite for ALD, and ALD can be difficult to diagnose because patients often minimize or deny their alcohol abuse. Even more confounding is the fact that physical exams and lab findings may not specifically point to ALD.

Diagnosis typically relies on laboratory tests of three liver enzymes: gamma-glutamyltransferase (GGT), aspartate aminotransferase (AST), and alanine aminotransferase (ALT). Liver disease is the most likely diagnosis if the AST level is more than twice that of ALT, a ratio some studies have found in more than 80 percent of alcoholic liver disease patients. An elevated level of the liver enzyme GGT is another gauge of heavy alcohol use and liver injury.

Of the three enzymes, GGT is the best indicator of excessive alcohol consumption, but GGT is present in many organs and is increased by other drugs as well, so high GGT levels do not necessarily mean the patient is abusing alcohol.

Hepatitis C is a liver disease caused by the hepatitis C virus (HCV). People usually become infected after coming in contact with blood from an infected person. Sharing needles or other equipment for injecting drugs is the most common way of spreading HCV. The disease also can be spread by sexual contact. About 4 million people in the United States have HCV, and between 10,000 and 12,000 die each year.

HCV infection is particularly common in alcoholics with liver disease. Heavy alcohol consumption accelerates patients’ progression from chronic HCV to cirrhosis (a condition in which fibrous scar tissue replaces healthy liver tissue) and liver cancer (specifically, hepatocellular carcinoma, the most common form of liver cancer) (5). Although fewer studies have examined the effects of moderate drinking on the course of liver disease in HCV patients, there is some indication that alcohol consumption in the moderate-to-heavy range may increase HCV-infected patients’ risk of developing liver fibrosis and cirrhosis (6). Research on whether gender has any effect on the connection between alcohol consumption and liver disease progression in HCV patients is very limited.

Blood tests can diagnose HCV infection, either by detecting antibodies to the virus or by detecting the presence and quantity of the virus’s genetic material itself. There currently is no vaccine for hepatitis C. The standard treatment includes the use of antiviral treatment (interferon-alfa with ribavirin).

Strict abstinence from alcohol is important during treatment, as heavy drinking during treatment has been shown to hinder patients’ responses to therapy (8). In addition, depression, irritability, and anxiety-side effects that occur in 20 to 30 percent of patients who receive interferon treatment-may be especially difficult to manage in patients with a history of alcoholism, perhaps putting them at greater risk for relapsing to drinking . Thus, for treatment to be most successful, clinicians recommend that alcoholic patients abstain from drinking alcohol at least 6 months prior to beginning interferon therapy. Light-to-moderate drinkers can begin treatment immediately and do not need a period of abstinence before starting therapy.

Abstinence from alcohol is vital to prevent further liver injury, scarring, and possibly liver cancer; it appears to benefit patients at each stage of the disease. Although only a few studies have looked specifically at the effects of abstinence on the progression of ALD, virtually every one has shown that abstaining from alcohol is beneficial.

Many people who drink alcohol also smoke cigarettes, and European studies have found scarring of the liver occurs more rapidly in ALD patients who smoked. Obesity is another factor associated with liver disease-specifically, the development of fatty liver and nonalcoholic steatohepatitis, a disorder similar to alcoholic hepatitis. Thus, stopping smoking and maintaining a healthy weight are two more measures patients can take to reduce or prevent further liver injury.

Although alcoholic beverages contain calories, research suggests that under certain conditions these calories do not have as much value for the body as those derived from other nutrients. In addition, many alcoholics suffer from malnutrition, which can lead to liver damage and impaired liver function. Many drinkers take in less than the recommended daily amount of carbohydrates, proteins, fats, vitamins (A, C, and B, especially thiamine B1), and minerals (such as calcium and iron).

To prevent these deficiencies, clinicians should provide alcoholics with a balanced diet. Dietary supplements may prevent or relieve some of alcohol’s harmful effects. For example, brain damage resulting from a lack of vitamin B1, which can lead to conditions such as Wernicke-Korsakoff syndrome, can be reversed to some extent. Because vitamin B1 generally can be administered safely, clinicians often recommend that all alcoholics undergoing treatment receive 50 milligrams of thiamine per day (either by injection if the patients are hospitalized or by mouth). Alcoholics also should receive supplements of vitamins B2 (riboflavin) and B6 (pyridoxine) in dosages found in standard multivitamins. Vitamin A, however, can be toxic when combined with alcohol and should be given only to those alcoholics who have a well-documented deficiency and who can stop or significantly reduce their drinking.

In addition to dietary supplements, alcoholics with moderate malnutrition might benefit from treatment with anabolic steroids. These compounds, which are derived from the male hormone testosterone, can be used in the short term to promote overall body “buildup” and, therefore, may help the alcoholic better recover from malnutrition.

Studies using animals are helping researchers find other dietary supplements that may help in the treatment of liver disease. For example, eating certain healthy fats (called medium-chain triglycerides, or MCTs) may help to reduce the buildup of harmful fats in the liver. MCTs generally are available only in health food stores as a dietary supplement.

Oxidative stress plays a major role in the development of alcoholic liver disease. Oxidative stress occurs when harmful oxygen molecules, or free radicals, form in the body. These molecules are highly charged and very unstable. They cause cellular changes in their effort to pair with the nearest available molecule, injuring cells and modifying their function. Antioxidants can help prevent this free radical damage.

An important antioxidant, glutathione, or GSH, cannot be used as a supplement because this substance cannot directly enter the cells threatened by oxidative stress. However, researchers are using a precursor compound, the molecule S-adenosylmethionine (SAMe), which can enter the cells and then break down to form the helpful antioxidant. When SAMe was given to patients with alcoholic cirrhosis in a clinical trial, they were significantly less likely to die or require a liver transplant within the next 2 years, compared with patients who had received an inactive substance (that is, a placebo). Moreover, the study detected virtually no harmful side effects of SAMe treatment. Thus, this approach appears to hold promise for the treatment of patients with ALD.

Although corticosteroids are the most extensively studied form of therapy for alcoholic hepatitis, their usefulness may be only short-term. Mathurin and colleagues reported significantly improved survival at 28 days (85 percent vs. 65 percent) in severely ill alcoholic hepatitis patients, but this survival advantage did not extend much longer than a year. Most investigators agree that if corticosteroids are used, they should be reserved for patients with the most severe liver disease. In addition, steroids have well-documented side effects, including increasing the risk of infection, which already is substantial in patients with alcoholic hepatitis.

ALD patients must undergo a thorough evaluation to determine whether they are suitable candidates for transplant. This screening addresses any coexisting medical problems, such as heart damage, cancer, pancreatitis, and osteoporosis, which might influence the outcome of the transplant. It includes a psychological evaluation to identify those patients who are most likely to remain abstinent and comply with the strict medical regimen that follows the procedure.

For transplantation to be successful in alcoholic patients it is essential that they remain abstinent after the surgery and comply with a demanding medical regimen (e.g., consistently take the necessary antirejection medications). Routinely conducting psychiatric evaluations before patients are included on the list of candidates for transplantation helps to identify those who may not be able to meet these criteria.

Another concern is that patients with ALD will not be able to comply with the antirejection medication regimen, but this has not been supported by research. Liver rejection rates are similar for patients transplanted for ALD and those transplanted for other types of liver disease, indicating comparable rates of compliance with the antirejection medications. Finally, it was believed that ALD patients would use more resources, thereby incurring higher costs than non-ALD patients, but again this assumption has not been corroborated by research evidence.

Footnotes and citations appear in the source article which derived from the website of the National Institute on Alcohol Abuse and Alcoholism (NIAAA) at Alcohol Alert.  All material contained in “Alcohol Alert” is in the public domain and may be used or reproduced without permission from NIAAA. Source material for this Alcohol Alert originally appeared in the journal Alcohol Research & Health, “Alcoholic Liver Disease: Part I, An Overview” and “Alcoholic Liver Disease: Part II, Mechanisms of Injury” (Vol. 27, Nos. 3 and 4, 2003). Alcohol Research & Health is the quarterly, peer-reviewed journal published by the National Institute on Alcohol Abuse and Alcoholism. Each issue provides in-depth focus on a topic in the field of alcohol research.