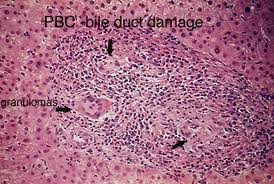 Primary biliary cirrhosis (PBC) is a condition that slowly damages the bile ducts in the liver. In time, the flow of bile is restricted and bile builds up in the liver. This damages liver cells which in some cases leads to cirrhosis (scarring of the liver). Common early symptoms are itch and tiredness. Other symptoms develop as the disease progresses. Medicines which aim to ease symptoms and slow the progression of the disease may be used. A liver transplant may be needed if the liver becomes badly damaged.

What does the liver do?

The liver is in the upper right part of the abdomen. Its functions include:

Storing glycogen (fuel for the body) which is made from sugars. When required, glycogen is broken down into glucose which is released into the bloodstream.

Helping to process fats and proteins from digested food.

Making proteins that are essential for blood to clot (clotting factors).

Processing many medicines which you may take.

Helping to remove or process alcohol, poisons and toxins from the body.

Making bile which passes from the liver to the gut and helps to digest fats.

What are bile and bile ducts?

Bile is a yellow-green liquid that contains various chemicals and bile salts. Bile helps you to digest food, particularly fatty foods. It also helps the body to absorb certain vitamins (A, D, E and K) from the food that you eat.

Bile is made by liver cells. Liver cells pass out bile into tiny tubes called bile ducts. There is a network of bile ducts in the liver. They join together (like branches of a tree) to form the larger ‘common bile duct’. Bile constantly drips down the tiny bile ducts, into the common bile duct, and into the duodenum (part of the gut – the first part of the small intestine).

What is primary biliary cirrhosis?

PBC is a condition that affects the bile ducts. It is called:

Primary – because the cause is not known. (That is, it is not ‘secondary’ to any known cause such as alcohol or poisons.)

Biliary – because it affects the bile ducts.

As damage to the liver cells becomes worse, scarring (cirrhosis) may gradually develop in the liver. In time, cirrhosis can cause liver failure and other serious problems. (See separate leaflet called ‘Cirrhosis’ which describes cirrhosis in more detail.)

In fact, the term PBC is controversial because not all people with PBC develop cirrhosis. Also, if cirrhosis does occur, it typically develops several years after the disease first begins (after several years of inflammation of the bile ducts).

People with PBC have an increased chance of developing other autoimmune diseases. For example, Sjögren’s syndrome, thyroid disease, Raynaud’s phenomenon and scleroderma.

PBC is an uncommon condition. It affects about 1 in 1000 people in the UK. About 9 in 10 cases occur in women. It most commonly develops in women aged between 30 and 65.

What are the symptoms of PBC?

The most common early symptoms include the following:

Tiredness (fatigue) is often the first symptom to develop. It can be quite a disabling type of tiredness. The reason PBC causes tiredness is not clear.

Itch (pruritus) is a common symptom, but does not always occur. It is sometimes severe and distressing with the whole skin feeling itchy. The cause of the itch is not clear. It may be due to a chemical from the bile which builds up in the bloodstream.

Discomfort over the liver (upper right of abdomen) occurs in about one in five cases.

Red or pink blotchiness of the hands may develop.

Some people experience nausea, bloating or diarrhoea. Stools may be pale, bulky and difficult to flush away (called steatorrhoea or ‘fatty stools’) because of the difficulty that your body has digesting fat when you have PBC.

When a doctor examines you, he or she may feel that your liver is enlarged. As the disease progresses jaundice (yellowing of the skin) develops. This is due to a build-up of bilirubin (a chemical in bile) in the bloodstream. If cirrhosis develops, other liver-related symptoms are likely to develop. (See separate leaflet called ‘Cirrhosis’ which explains these in detail.)

Some people with PBC have no symptoms

As mentioned, some people with PBC also have other autoimmune diseases. Therefore, symptoms related to these other diseases also occur in some cases. For example, a dry mouth and dry eyes are the main symptoms of Sjögren’s syndrome.

The risk of developing osteoporosis is increased in women with PBC. (See separate leaflet called ‘Osteoporosis’ for more details.) Other complications related to the disordered function of the liver can develop in some cases. For example, problems with the kidneys and pancreas. Liver cancer is also an uncommon complication.

How is PBC diagnosed?

If PBC is suspected from your symptoms, a blood test will usually confirm the diagnosis. Most people with PBC have:

An antibody called antimitochondrial antibody. This antibody may have something to do with causing the disease as it ‘attacks’ part of cells called mitochondria.

Many people with PBC also have raised cholesterol levels. However, this is usually the ‘good’ HDL-cholesterol which means that there is not an increased risk of coronary heart disease. (See leaflet called ‘Cholesterol’ for more information.)

Your doctor may arrange for you to have an ultrasound scan of your liver. Gel is applied to the skin of your abdomen and the ultrasound probe is moved across your skin (similar to the scan that women have during pregnancy). This allows the doctor to look at your bile ducts and check that your symptoms are not caused by any other conditions.

A liver biopsy is when a small sample of tissue is removed from a part of the liver. The sample is then examined under the microscope to look for abnormal cells. Typical changes seen under the microscope from the biopsy sample can confirm the diagnosis of PBC. The biopsy can also give an indication of the severity. For example, if cirrhosis is present, and if so, how badly. (See separate leaflet called ‘Biopsy – Liver’ for more details.)

What is the treatment for PBC?

There is no cure for PBC. Treatments aim to ease symptoms and to slow the progression of the disease. A liver transplant can be life-saving in the later stages of the disease.

Itch can be a distressing symptom and can be difficult to treat. Antihistamines may be used initially to help to relieve itch. However, colestyramine (trade name Questran®) is the most commonly used medicine for itch. It works by ‘binding’ to bile in the gut. (When bile gets into the gut, it travels down to the large intestine where some of it is absorbed back into the bloodstream, and goes back to the liver to be reused. As colestyramine binds to bile in the the large intestine, it stops this ‘reabsorption’ and so more bile than usual is passed out with the faeces (stools). This helps to reduce the build up of bile in the liver and bloodstream which often eases itch.) There may be a delay of 1-4 days after starting treatment before itch improves. Other bile-binding medicines are sometimes used.

Other medicines are sometimes used to ease itch if the above are not helpful. For example, rifampicin. It is not clear how these work, but they do help in some people. Ursodeoxycholic acid (see below) may also relieve itch. Plasmapheresis (like a plasma exchange) has been used in some cases of persistent, severe itch.

Dry skin can make itch worse, so using liberal amounts of moisturiser is useful if you have dry skin.

No medicines seem to ease tiredness which is often a main symptom.

Treatment to slow the progression of the disease

There is no medicine that stops or reverses the disease. However, some medicines may slow down the progression of the disease in some people.

Ursodeoxycholic acid (UDCA or URSO) is the most common medicine used with the aim of slowing the progression of the disease. It works by changing the make-up of bile in the liver which may reduce the harmful effect of bile on the liver cells. However, its effectiveness is disputed and it may not work in everyone. Some studies have shown that it seems to work best in the early stages of PBC. Some evidence suggests that ursodeoxycholic acid may help to delay the need for a liver transplant in some people with PBC and may help to keep them alive for longer. However, its effect in the later stages of PBC (in people who have developed cirrhosis) does not seem to be as good. It may also help to ease itch.

Immunosuppressive medicines are sometimes used. For example, penicillamine, azathioprine, methotrexate, ciclosporin and steroids. These work by suppressing the immune system. But again, there is little clear cut evidence to say how effective they are in treating PBC. They all have a risk of causing significant side-effects.

Your specialist will advise on the pros and cons of trying any particular medicine.

As mentioned, various other autoimmune diseases are more common in people with PBC. So, you may need treatment for these too.

Osteoporosis is more common in women with PBC. The prevention and treatment of osteoporosis is the same as for any other woman and is discussed in a separate leaflet called ‘Osteoporosis’.

Treatment of cirrhosis and liver failure

See the separate leaflet called ‘Cirrhosis’ for more details about cirrhosis. A liver transplant is an option if the liver becomes badly damaged due to cirrhosis and ‘fails’. This is a major operation and is not to be undertaken lightly. However, it can be a life-saving measure and the results are often very good. Some people with severe itch which has not responded to any other treatment have a liver transplant even if their liver is not too badly damaged.

Sometimes, PBC can come back and affect the transplanted liver. However, this may not happen and, if it does, can take up to 15 years before it returns.

Do I need to take any other precautions?

If you have PBC, you may find that you are no longer able to cope with drinking alcohol. Some people just drink a small amount of alcohol on special occasions. The amount of alcohol that is sensible for you to drink will vary from person to person and will depend on the degree of damage to your liver. You should ask your doctor to advise about whether you can drink alcohol and how much alcohol is sensible for you.

You should always remember to tell a doctor or a pharmacist that you have PBC before you start taking any medication (including any drugs, supplements or remedies that you may buy over the counter). This is because a lot of drugs are processed in the liver. Because your liver may not be working so well if you have PBC, you may get some unwanted effects from certain drugs.

What is the outlook (prognosis)?

PBC is a progressive disease. However, in many cases, the disease progresses very slowly over a number of years. Many people can have very few problems for perhaps decades. At the outset of the disease it is difficult to predict if, and when, the disease will progress to cirrhosis and liver failure. Coping with the common symptoms of itch and tiredness can be difficult. Research continues to try to identify medicines that may be more effective at preventing the progression of the disease than those currently available.

A charity established to provide help, support and information for sufferers of PBC, their families and friends.

A national organisation devoted to the prevention, treatment and cure of all liver diseases. They have an extensive range of publications on individual liver conditions

Posted in Primary Biliary Cholangitis and tagged biliary, biliary cirrhosis primary, primary
← PBC can be treated with RituximabPrimary Biliary Cirrhosis – A MUST read! →