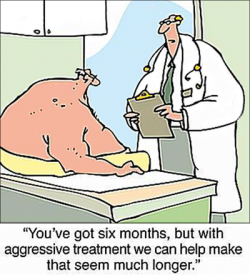 This retrospective study evaluated the morbidity and survival of patients with compensated, histologically proven cirrhosis from hepatitis C virus (HCV) infection. A total of 384 western European patients were monitored from 1982 to 1993. All patients had biopsy-proven cirrhosis and abnormal serum aminotransferase levels, lacked evidence of hepatitis B infection or hepatocellular carcinoma (HCC), did not have alcohol intake 80 mg/ day for 5 y, and had no hepatic decompensation (i.e., ascites, variceal bleeding, encephalopathy, or jaundice) at time of diagnosis.

The endpoints were death or morbidity (decompensation or development of HCC). The mean follow-up period was 61 months (range 6–153 months) and of the 361 patients whose stored sera were tested for HCV antibody, 98% were positive. A total of 29 patients developed HCC with an annual incidence of 1.4% per year. Of the remaining 355 patients without HCC, 65 developed decompensation. The 5-yr risks of developing HCC and decompensation were 7% and 18%, respectively.

Two hundred and five patients (53%) were treated with interferon alpha. After adjustments for baseline indices, the 5-yr estimated survival was not different between the treated and untreated groups (96%vs 95%, respectively).

The authors conclude that HCV-associated cirrhosis often has an indolent course, shows a slowly progressive increase in morbidity, and portends a relatively long-life expectancy. (Am J Gastroenterol 1998;93:1386–1387. © 1998 by Am. Coll. of Gastroenterology)

Although much has been written about the progression of HCV hepatitis to cirrhosis, there is a scarcity of data concerning the clinical course and long-term prognosis following the development of cirrhosis. The findings in this paper, if confirmed by other investigators, will have far reaching implications regarding the counseling, potential treatment, and overall management of patients with compensated HCV cirrhosis.

Does HCV cirrhosis inevitably result in death over a short period? Previous natural history studies have reported the progressive nature of liver disease in HCV infection.

In patients followed for a variable number of years (mean of 8–13 yr after onset of disease), a range of 8–24% have been reported to develop cirrhosis.

On the other hand, the high (50%) 5-yr mortality after any decompensation supports the notion that once decompensation takes place, strong consideration should be given to liver transplantation. The rates of development of HCC in patients with chronic hepatitis C has been reported to be 1–7% per year.

Although the annual incidence of HCC in this study was only 1.4%, the risk appeared to progressively increase with time with the 3-yr and 5-yr probability being 4% and 7%, respectively. Therefore, there is a need for development of effective surveillance strategies for identifying HCC in these higher risk patients.

Multivariate analysis of risk factors determined that serum bilirubin, presence of hepatic stigmata, platelet count, and age were the only factors that significantly and independently contributed to the estimation of prognosis.

This finding should not be surprising since the former three are associated with severity of cirrhosis, and advanced age implies a longer duration of disease activity. On univariate analysis, the interferon-treated group appeared to have a more favorable prognosis, but when multivariate analysis adjusted for the above four risk factors, no treatment benefit was present.

As the authors point out, this statistical adjustment, although valid, cannot replace true randomization. It is well known that the presence of cirrhosis diminishes the response rate to interferon alpha, and thus a lack of improved outcome in this group is not necessarily surprising. Nevertheless, it may be that the subgroup of patients without the risk parameters may truly benefit from therapy, and only a well-designed randomized study will adequately address this question.

What practical lessons can be derived from this study? The diagnosis of cirrhosis in a patient with hepatitis C should not be regarded as indicating impending demise since the great majority of patients are doing quite well. More importantly, most of these patients remain compensated.

Although treatment to prevent the onset of cirrhosis still appears to be a viable goal, treatment of middle-aged or elderly patients is less attractive, particularly considering the a relatively benign overall prognosis and the less than optimal results of current regimens. Nevertheless, a significant proportion of patients do develop decompensation and/or HCC (23% of the overall total).

Thus, once cirrhosis is established, further efforts should focus on stalling the evolution of hepatic decompensation, and developing effective surveillance strategies for early detection of HCC to achieve better outcomes.