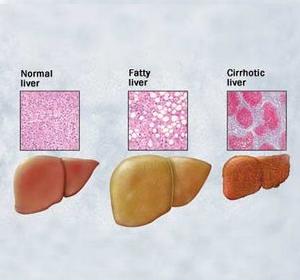 Steatosis is a condition characterised by the build up of fat within the liver, sometimes triggering inflammation of the liver. It is also known as fatty liver. It is only recently that the significance and relationship of steatosis to HCV has begun to be understood.

There are two different forms of steatosis that may be found in people with HCV: metabolic steatosis and ‘ HCV-induced steatosis. Metabolic steatosis can result from obesity, raised blood fat levels (hyperlipidemia), insulin resistance and type II diabetes and is similar to the type of fatty infiltration caused by excessive alcohol consumption and that is also found in Non-Alcoholic Fatty Liver (NASH).

Both forms of steatosis increase the risk of disease progression in HCV infection, reduce the likelihood of responding to HCV treatment, and may possibly contribute to the development of liver cancer (hepatocellular carcinoma, or HCC) in people who have cirrhosis. It is helpful to know which type of steatosis you might have in order to manage it or to be better placed to decide whether to undergo treatment or not.

Whilst there is no direct treatment for steatosis exercise and diet can significantly reduce the amount of fat in the liver. However, for people with genotype 3, antiviral treatment can often markedly reduce or even eliminate steatosis. This does not seem to apply to other genotypes.

The causes of metabolic steatosis are not yet completely understood, but it is known to be linked to high body mass index (a measure of obesity), altered blood fat levels (e.g., triglycerides, cholesterol), elevated blood glucose, insulin resistance, and type II diabetes.

The condition results in the build up of globules of fat in the liver sometimes accompanied by inflammation. It is also still far from clear exactly how this build up of fat actually damages the liver, but a number of different theories of possible mechanisms have been suggested. These include:

Oxidative damage (when highly reactive oxygen molecules such as free radicals, produced as a result of the cells normal chemical reactions, interact with other molecules damaging the cells and tissue of the liver)

On average steatosis is about two and half times more common in people with HCV than in the general population, so it is clear that the presence of the virus in the body can actually trigger steatosis. Biopsy samples in people with HCV who have steatosis tend to show that fat accumulates around the portal areas, rather than in the middle of the lobules of the liver, as is usually the case Non Alcoholic Fatty Liver Disease (NAFLD) which point to the virus being the trigger rather than other factors.

Surprisingly people with genotype 3, who achieve sustained virologic response (SVR) through treatment, have a marked decrease in and sometimes a complete resolution of steatosis. If they then relapse steatosis then reappears. People with other genotypes conversely show no improvement in the level of steatosis after successful treatment.

Many people with steatosis experience no symptoms. Symptoms that people do experience are non-specific and liver enzymes levels are not necessarily raised. As with fibrosis, the definitive way to diagnose steatosis is a liver biopsy.

Steatosis and progression of HCV

It is not yet clear whether metabolic steatosis or HCV-induced steatosis both carry the same level of risk of increasing the rate of progression of the disease. It is well known though that there is a definite link between the severity of steatosis and the extent of scarring on the liver. Recent studies have shown that higher grades of steatosis relate to higher grades of scarring and with more rapid development of fibrosis and cirrhosis. Steatosis is also know to reduce the likelihood of responding to HCV treatment, and may contribute to the development of liver cancer (hepatocellular carcinoma, or HCC) in those with cirrhosis. However, few studies have yet separated the two types of steatosis when examining its affects on fibrosis progression in people with HCV. It has been suggested, but not yet confirmed, that when people with genotype 3 have both forms of steatosis, the combination may trigger severe advancement of fibrosis.

There is increasing evidence that steatosis can reduce the effects of treatment. Some retrospective studies have shown that people with steatosis were less likely to achieve a sustained virologic response (SVR) even when taking into account other factors that might induce steatosis. One study found that sustained virologic response rates were 18-32% lower in people with steatosis compared to people without steatosis after adjusting for other co-factors that affect treatment such as genotype, fibrosis score, and viral load level.

A recent study found that HCV patients who participated in a diet and exercise program for three months lowered their grade of steatosis and, remarkably, their fibrosis score.