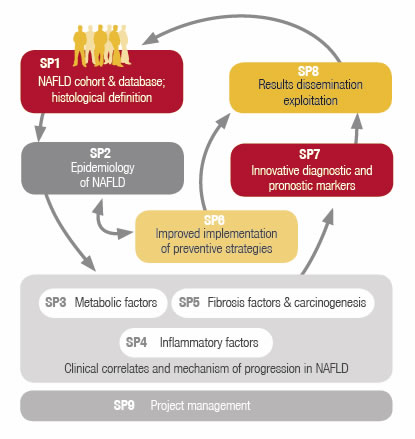 Non-alcoholic fatty liver disease (NAFLD) is one cause of fatty liver changes, when fat is deposited (steatosis) in the liver when this is not due to excessive alcohol use. It is related to insulin resistance and the metabolic syndrome, and may respond to treatments originally developed for other insulin-resistant states (e.g. diabetes mellitus type 2), such as weight loss, metformin and thiazolidinediones.1

Non-alcoholic steatohepatitis (NASH) is the most extreme form of NAFLD, which is regarded as a major cause of cirrhosis of the liver of unknown cause.2 Most patients with NAFLD have no or few symptoms. Infrequently, patients may complain of fatigue, malaise, and dull right-upper-quadrant abdominal discomfort. Mild jaundice may, rarely, be noticed. More commonly NAFLD is diagnosed following abnormal liver function tests during routine blood tests.

By definition, alcohol consumption of over 20 g/day (about 25 ml/day) excludes the condition.1 NAFLD is associated with insulin resistance and the metabolic syndrome (obesity, combined hyperlipidemia, diabetes mellitus (type II) and high blood pressure). Secondary causes NAFLD can also be caused by the following medications:

Diagnosis: Disturbed liver enzymes are common, and liver ultrasound may show steatosis; it may also be used to exclude gallstone problems (cholelithiasis). A biopsy (tissue examination) of the liver is the only test that is widely accepted as definitively distinguishing NASH from other forms of liver disease, and can be used to assess the severity of the inflammation and resultant fibrosis.1

Non-invasive diagnostic tests have been developed, such as FibroTest, that estimates liver fibrosis3, and SteatoTest, that estimates steatosis4, however their use has not been widely adopted. 5 Apoptosis has been shown to be the mechanism of hepatocyte destruction and caspase-cleaved cytokeratin 18 (M30-Apoptosense ELISA) in serum/plasma is often elevated in patients with NASH. Other tests are often carried out. Relevant blood tests include erythrocyte sedimentation rate, glucose, albumin, and renal function.

Because the liver is important in making proteins important for coagulation, some coagulation studies are often carried out, especially the INR (international normalized ratio). Blood tests (serology) are usually carried out to rule out viral hepatitis (hepatitis A, B, C, EBV, CMV and herpes viruses), rubella, and autoimmune causes.

Hypothyroidism is more prevalent in NASH patients, which would be detected bydetermining the TSH.6 Some suggest that, in overweight patients whose blood tests do not improve on losing weight and exercising, a further search of underlying causes of fatty liver must be sought, as well as those with fatty liver that are very young or not overweight or insulin-resistant, those whose physical appearance indicates the possibility of a congenital syndrome, have a family history of liver disease, have abnormalities in other organs, and those that present with moderate to advanced fibrosis or cirrhosis.7

NAFLD is considered to cover a spectrum of disease activity. This spectrum begins as fatty accumulation in the liver (hepatic steatosis). A liver can remain fatty without disturbing liver function, but by varying mechanisms and possible insults to the liver may also progress to outright inflammation of the liver.

When inflammation occurs in this setting, the condition is then called NASH. Over time, up to 20 percent of patients with NASH may develop cirrhosis.citation needed Cigarette smoking is not associated with an increased risk of developing NASH. The exact cause of NAFLD is still unknown.

However, both obesity and insulin resistance probably play a strong role in the disease process. The exact reasons and mechanisms by which the disease progresses from one stage to the next are the subject of much research and debate. One debated mechanism proposes a “second hit”, or further injury, enough to cause change that leads from hepatic steatosis to hepatic inflammation.

A large number of treatments for NAFLD have been studied. While many appear to improve biochemical markers such as alanine transaminase levels, most have not been shown to reverse histological abnormalities or reduce clinical endpoints:1 Treatment of nutrition and excessive body weight: Nutritional counseling: Diet changes have shown significant histological improvement.8

Gradual weight loss may improve the process in obese patients; rapid loss may worsen NAFLD. The bad effect of rapid weight loss is controversial: the results of a meta-analysis showed that the risk of progression is very low.1 A recent meta-analysis presented at the Annual Meeting of American Association for Study of Liver Diseases(AASLD) reported that weight-loss surgery leads to improvement and or resolution of NASH in around 80 % of patients.2 Insulin sensitisers (metformin9 and thiazolidinediones10) have shown efficacy in some studies.

Antioxidants and ursodeoxycholic acid, as well as lipid-lowering drugs, have little benefit.citation needed In a study using the NHANES III dataset, it has been shown that mild alcohol consumption (one glass of wine a day) reduces the risk of NAFLD by half.11