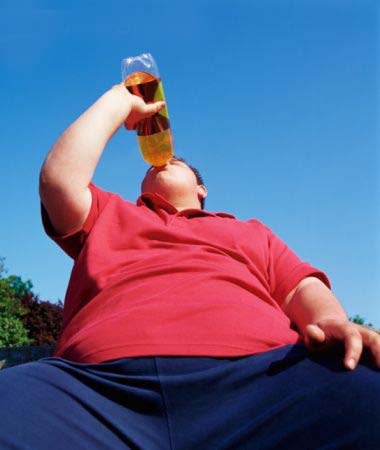 Drinkers who are overweight face a “double whammy” impact on their liver, research suggests.

Two studies of more than a million UK men and women suggest excess weight and alcohol act together to raise the risk of cirrhosis and other liver diseases.

Obese women who drink little more than a glass of wine a day have almost double the risk of liver disease than other women, the researchers said.

A similar effect is seen in men, the British Medical Journal reported.

The authors of the research said “safe” alcohol limits for the overweight may need to be redefined.

Rates of liver disease and obesity are increasing in the UK.

Alcohol is a major cause of liver cirrhosis and there is mounting evidence that excess weight also plays a role.

In the first study, researchers at the University of Oxford studied more than a million middle-aged women in England and Wales.

Among women who reported drinking a third to half units a day – 0.8 in 1,000 will develop liver cirrhosis over five years if they are of a healthy weight compared with 1 in 1,000 women who are obese.

Among women drinking 2.5 units a day, 2.7 in 1,000 will develop liver cirrhosis over five years if they are of healthy weight, compared with 5 in 1,000 women who are obese.

They found that being overweight or obese increased the likelihood of developing liver cirrhosis.

Dr Bette Liu of Oxford’s Cancer Epidemiology Unit said: “We estimate that almost 20% of liver cirrhosis in middle-aged UK women is due to excess weight, while almost 50% is due to alcohol consumption.”

The second study followed more than 9,000 men in Scotland.

Obese men who said they drank 15 or more units a week had the greatest risk of liver disease; almost 19 times higher than those who were slim.

Writing in the BMJ, the authors said their findings have important health implications.

Lead author Dr Carole Hart of the University of Glasgow said: “Further research might show that there could be different limits more applicable to overweight and obese people.”

Cirrhosis is the result of long-term damage to the liver.

Alison Rogers of the British Liver Trust said the data showed a “double whammy effect” where two causes of liver disease both impact on a person’s liver together, and the impact is greater than the sum of the parts.

The Department of Health said liver disease was a growing problem and they were developing a national strategy to manage it.

A spokesperson said: “Prevention is always better than cure and our public health campaigns on drinking and obesity reflects this.”

Posted in Diet and tagged alcohol, diet, obesity
← More on CoffeePros and Cons of Olive Oil →