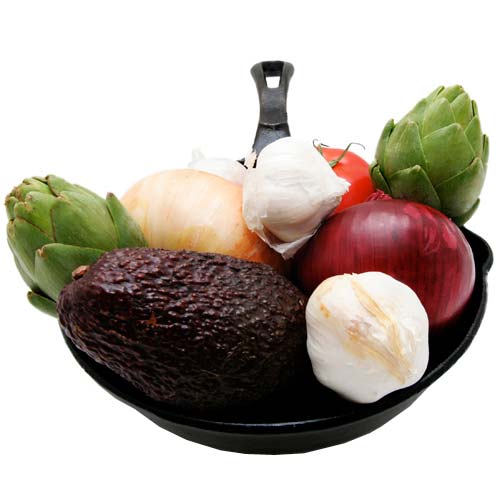 Discover which six foods to make part of your regular meal plan – foods that can help your liver better cope with chronic viral hepatitis.

Sometimes, our best resources to apprehend a problem lie right under our nose. When it comes to preventing the progression of chronic viral hepatitis, many experts believe that some of our safest, most potent allies reside in the kitchen. Because certain foods can help the liver better handle and neutralize an overload of toxins, six edibles capable of reducing the liver’s susceptibility to hepatitis viruses are described below.

We are constantly being exposed to toxic materials that the liver must remove from our circulatory system. Whether in the form of toxins from our environment, chemicals in our food supply or naturally produced waste, the liver is continually recruited to cleanse and purify blood. Despite its effective system for detoxification, the liver’s ability to perform this duty is hindered when it is infected with viral hepatitis:

· When viral hepatitis causes inflammation in the liver, the cells are consumed by the inflammatory response and less able to perform their duties.

· When greater quantities of toxins are in the blood, the liver is more susceptible to permanent damage, the risk of brain damage (hepatic encephalopathy) grows and there is a greater possibility of developing cancerous cells.

Thus, people with chronic viral hepatitis are helping their liver out when they take steps to assist detoxification. Certain foods are particularly helpful because they contain nutrients the body needs to produce and activate dozens of enzymes involved in the various phases of detoxification.

Six common foods that can help with detoxification, include:

1. Garlic – Besides its antiviral property that could battle a hepatitis virus, garlic helps cleanse bacteria, parasites and other unwanted living pathogens that pollute the blood supply. While only fresh garlic has this characteristic, adding this raw, aromatic to your food will help minimize fatty buildup in the arteries, which can harbor toxins. In addition, garlic contains sulfur compounds, which help the liver break down certain cancer-causing toxins.

3. Lemons – Lemons are known to be excellent liver detoxifiers. Lemons contain high amounts of vitamin C, which is needed to manufacture glutathione – a substance used by virtually every cell in the body to neutralize toxins. Since lemons help increase the amount of glutathione in the body, they assist the liver in detoxification.

4. Blueberries – These bright colored, little fruits are loaded with anti-inflammatory phytochemicals. Thus, this natural anti-inflammatory may help calm the inflammation characteristic of chronic viral hepatitis. In addition, blueberries are purported to help block toxins from crossing the blood-brain barrier – an especially useful function for those with end stage liver disease who are vulnerable to hepatic encephalopathy.

5. Watercress – Because it increases detoxification enzymes and lowers cancerous cells, this peppery leafy green makes a fantastic addition to any salad or sandwich. In a 2009 German study, researchers found that watercress successfully increased enzymes that foster detoxification.

6. Grapefruit – This slightly tart, slightly sweet citrus fruit has compounds that cleanse harmful viruses from the body. Researchers at the Massachusetts General Hospital Center for Engineering in Medicine showed that naringerin, a flavonoid found in grapefruit, blocks the secretion of Hepatitis C virus from infected cells. However, make sure you are aware of all of the medications that grapefruit interacts with before making it a staple in your diet.

Tapping into the knowledge behind nutritional science gives anyone the power to protect his or her liver from chronic hepatitis. Accessible in most grocery stores, the six foods listed above can help your liver get rid of toxins.

Even though including garlic, kale, lemons, blueberries, watercress and grapefruit into your diet does not require a medical degree, eating these foods can turn everyday meals into powerful, effective medicine.

Posted in Diet and tagged diet, food
← Maple Syrup Could Be a Liver AllyMore on Coffee →