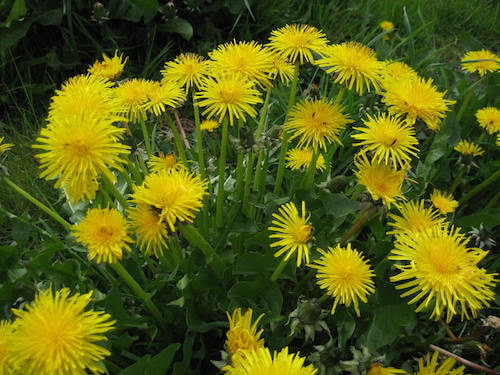 Dandelion as a Diuretic

Besides their culinary uses as coffee substitute and salad ingredient, the root and leaf of this pervasive weed of the aster family are also used in traditional medicine. Dandelion is grown commercially in both the United States and Europe.

Both dandelion leaf and root have been used for centuries to treat liver, gall bladder, and kidney ailments, weak digestion, and rheumatism. They are also considered mildly laxative. The fresh root or its preparations are thought to be more potent than the dried root. The leaves have traditionally been used as a diuretic.

Dandelion root and leaf are widely used in herbal medicines in Europe. The leaves are diuretic but also high in potassium, so they help to compensate for potassium lost with increased urination. Bitter compounds in the leaves (and root) increased bile secretion in laboratory animals by more than 40 percent. The leaves are prescribed as a diuretic in cases of water retention and for bloating accompanied by flatulence and loss of appetite.

The bitter compounds in dandelion root help stimulate digestion and are mildly laxative in activity. The roots have been shown to be moderately anti-inflammatory, which supports their traditional use in the treatment of rheumatism. The root is used for dyspepsia, loss of appetite, as a diuretic, and for disorders associated with inhibited bile secretion from the liver.

The dried leaf and root, capsules, tinctures and tablets are available in the American market. Extracts (in 25 percent alcohol) are preferred for bile flow stimulation as the active compounds are more soluble in alcohol than in water.

The German Commission E monographs on dandelion leaf and root indicate that in cases of gallstones, dandelion products should be used only under a physician’s supervision. If bile ducts are obstructed, dandelion should not be used at all. The milky latex in fresh dandelion leaves may cause contact dermatitis. Bitter herbs such as dandelion root may also cause hyperacidity in some individuals.

Posted in Diet and tagged dandelion, diet, diuretic
← Could Curcumin Help Your Liver?Diet and Weight Loss with Cirrhosis →