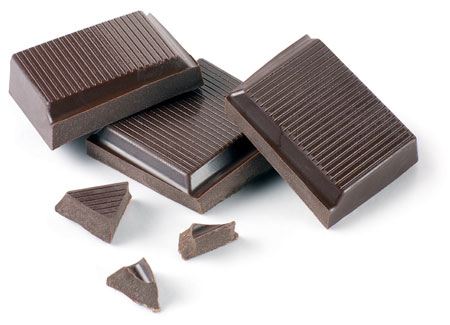 Dark chocolate has health benefits for those with cirrhosis and a related condition called portal hypertension, according to some recent research. This article explains the science behind this sweet news.|Dark chocolate is not only good for the heart. It can also be good for the liver, especially in anyone who has cirrhosis of the liver and a related condition called portal hypertension. This article explains./summary

Cirrhosis of the liver is the twelfth leading cause of disease-related deaths in the United States. Cirrhosis kills ten to fifteen thousand individuals in the U.S. each year.

Anything that helps a cirrhosis sufferer live longer definitely comes as good news. But one recent study found some extremely interesting results about eating dark chocolate: it appears dark chocolate can actually help prolong the lives of cirrhosis patients.

The announcement was made at the Annual Meeting of the European Association for the Study of the Liver in Vienna, Austria, in April 2010. The report described data revealing that dark chocolate reduced portal hypertension in patients with cirrhosis.

Knowing some basic information about portal hypertension and the nature of cirrhosis will help you understand the findings.

Cirrhosis results from long term damage to the liver. Healthy liver tissue is destroyed and replaced by scar tissue. A liver that is normal has the ability to generate new cells to replace those that have been damaged. At a certain point, however, so much scar tissue can occur that it’s impossible to reverse the damage. Cirrhosis blocks the flow of blood through the liver, and can eventually lead to liver failure – the liver’s complete inability to function.

Most often caused by too much alcohol consumption or hepatitis, cirrhosis can result in a series of related liver problems and complications.

One complication in particular is known as portal hypertension. The portal vein is a blood vessel which carries blood from the digestive organs to the liver. When blood pressure rises in this vein, it’s called portal hypertension. When this occurs, large veins known as varices sometimes develop around the stomach and esophagus. These bypass any blockages caused by portal hypertension. Due to the fact that these blood vessels are fragile in the first place, and because they’re under an abnormal amount of pressure, ruptures are more likely to occur. Such cirrhosis-related ruptures are called bleeding varices, and they’re very dangerous.

But Spanish researchers found that cirrhosis patients who ate dark chocolate reduced their risk of bleeding varices from portal hypertension.

After you eat a meal, blood pressure in your abdominal area usually rises as more blood flows to the liver. This creates a danger to patients with cirrhosis because they may already have increased blood pressure in the portal vein. If the pressure rises high enough, it can cause a blood vessel to rupture.

Dark chocolate contains a high percentage of chemicals called flavenoids, which have proven benefits for the heart and are especially helpful in lowering cholesterol. You can also find flavenoids in strawberries, blueberries, cinnamon, cabbage, and certain kinds of nuts. Flavenoids also help reduce blood pressure because they relax veins and arteries, allowing blood to flow more easily. The darker the chocolate, the higher the amount of flavenoids. Keep in mind though, not all types of chocolate have these chemicals, and therefore not all chocolate is necessarily good for your heart.

In the Spanish study, subjects with cirrhosis consumed a liquid meal containing either 85-percent cocoa dark chocolate or white chocolate. Subjects who ate white chocolate experienced a rise in blood pressure that was “statistically significant” over those who ate dark chocolate, according to the research team. This prompted researchers to conclude that eating dark chocolate could ultimately lower the odds of blood vessels rupturing in cirrhosis patients.