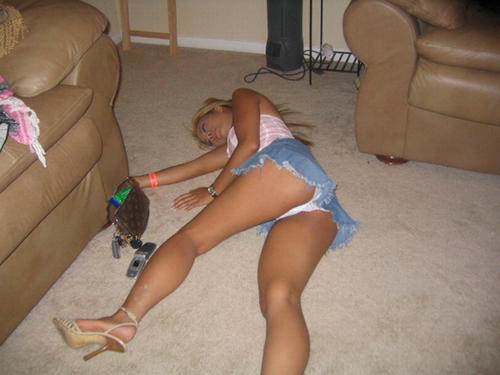 For much of the two decades she spent struggling with alcoholism, Gill Fletcher believed that she could keep her addiction secret. She was a high-flying corporate accounts manager with an £80,000-a-year salary, a smart car and two lovely children.

Much of her drinking was done behind closed doors or in luxury hotels during business trips away from home. Hangovers could be disguised with expensive make-up, carefully groomed hair and designer clothes.

But then came the night that she was invited to a neighbour’s party and got so drunk that she couldn’t remember what she had done. Several women from her street came round the following day to remind her how she had made passes at several of their husbands and lifted her top up to show off her bra. And flung CDs across the floor.

Reformed: Gill Fletcher hopes her children will forget her drinking

‘They said I was a disgrace and should be ashamed of myself,’ recalls the 47-year-old from Stafford.

As if being reprimanded her in own home wasn’t shameful enough, the sorry saga was witnessed by her children, Maddy, 11, and six-year-old Joe.

‘Their faces were ashen white,’ recalls Gill. ‘They listened to everything in silence. I couldn’t bear the humiliation of my children knowing that their mother was a drunk. I knew I could no longer hide the truth.’

For most people, of course, the very idea of the ‘alcoholic mother’ is the ultimate taboo.

But Gill’s story – and her long fight for sobriety – is far from unique.

According to experts, who have in recent months been warning about the alarming increase in alcohol consumption by women, when a mother drinks heavily the impact on family life can be truly devastating.

Most disturbing of all, two major charities set up to support the children of alcoholics are reporting a significant increase in calls concerning mothers with alcohol problems.

According to Emma Spiegler, founder of Children of Addicted Parents and People (COAP), around 70 per cent of the children contacting her website are doing so because of their mothers.

‘Traditionally, the mother is the main carer,’ says Miss Spiegler. ‘But these young people are missing out on someone to look after them and nurture them.’

And volunteers at the National Association for Children of Alcoholics (NACOA) also say they have seen a significant increase in calls to their helpline from children specifically talking about their mothers’ drinking problems.

‘Consistently, the greatest proportion of callers have talked about the drinking by the “mother” over other family members,’ says one.

The problem was also highlighted this week by BBC Newsround when it aired its own investigative programme Living With Alcohol, looking at the effect that parental drinking has on children.

There are no exact statistics to illustrate the extent of the problem, say experts, because by its very nature, maternal drinking tends to take place behind closed doors. And children affected by their mothers’ drinking do not easily talk about it because of feelings of guilt and embarrassment.

But heartbreaking messages left by children and teenagers on the COAP website illustrate just how dark a problem maternal alcoholism is.

‘She’s drunk just now and she’s lying on the couch sleeping,’ writes one 13-year-old. ‘I’m actually meant to be at school but I get worried about her so I don’t go.’

And another child: ‘My mum is a drinker and my dad is at his wits’ end. I don’t know exactly how long this has been going on but it has got worse over the last six years. We have no clue what to do.’

Gill Fletcher, who is now teetotal, blames her alcoholism on the breakdown-of her marriage and the ‘work hard, play hard’ culture at work.

Most of the time, she timed her drinking binges to coincide with Maddy and Joe’s visits to their father.

She recalls: ‘On Friday night, I would buy several large bottles of white wine. Saturday and Sunday would be blurred together as I spent the whole weekend drinking, starting in the afternoon. Then, often being sick, shaking all over, I’d start the whole binge all over again.

‘Despite feeling wretched, because in the evening the children would be back from their Dad’s, I would make a supreme effort to rid the house of all signs of my drinking. But often it would be Wednesday before my severe hangover lifted and I began to feel normal.’

In the depths of her alcoholism, Gill convinced herself that her drinking was not affecting her children, that when it came to playing ‘Mum’ she was keeping up a good act.

When a mother drinks heavily the impact on family life can be truly devastating, according to experts (posed by model)

There were days when she was too hungover to read a bedtime story or take them out but she would always feed the children their dinner, even if she crawled into bed soon after them, having eaten nothing herself.

‘I have tried to block out how the children must have felt,’ she says. ‘I never talk about it with them – probably because a part of me doesn’t want to think they were affected or suffered in any way.’

She adds: ‘Joe was, mercifully, too young to remember much but I worry Maddy remembers more. I must have been ratty and irritable to live with. I was a rubbish mum.’

Martin Walker, a 55-year-old architect from North London, is still haunted by the effect his wife’s drinking had on their three children.

‘Alcoholics live in a world of their own, a world of lies and denial,’ he says, ‘and all too often the children get caught up in that deceit. It becomes easier to pretend that Mummy didn’t fall over, that Mummy wasn’t unconscious on the bed through drink, that she was “ill” and that we should all “look after her”.’

His wife’s alcoholism, he says, tore the family apart as the children took sides with their mother or father.

‘She remained in denial about her problem,’ he says, ‘and two of our children felt that I was rocking the boat by trying to make her face up to the impact she was having on us all,’ adds Martin. ‘My son used to say: “Just let her be. We can’t change her.” But she was killing herself. I had to do something.’

He and his wife married in their early 20s when they were both teachers.

‘When she had our children things were fine and she often went days without a single drink,’ he says. ‘But as they went off to school, I began to notice that the first thing she did on getting home from work was to pour herself a glass of wine. She’d drink all night, managing to put the children to bed and I’d often leave her up in front of the television, glass in hand.

‘If I challenged her, she’d tell me to stop nagging her, that she’d had a stressful day at work. We started to sleep in separate bedrooms because she went to bed later than me. This allowed her to drink alone and often I’d find empty vodka bottles under the bed. By the time the children were in their teens she was a full-blown alcoholic.’

Martin’s wife eventually lost her job as a teacher – she was sacked for turning up in class drunk after lunch. It should have been a wakeup call, but it wasn’t.

‘I felt such a failure as a child, because I could not stop my mother raising a glass to her mouth. I felt we were so different from everyone else, and I couldn’t wait to leave.’

‘”Mummy isn’t well” was a common statement in our house,’ he adds. ‘I did all the cooking, the cleaning and the washing. When she was drunk she was over affectionate, hugging them and telling them how much she loved them. They found it very embarrassing.

‘I know this sounds extraordinary, but we learned to live around her drinking. We allowed her to become an alcoholic. The atmosphere in the house was awful, so subdued. The door of her bedroom was often closed.

‘I can’t tell you how often we rowed. The children hated the rows even more than the drinking. As soon as they were old enough to leave home, they left.’

For years, Martin struggled to cope. He turned for support to Alcoholics Anonymous but his wife refused to go. In the end, four years ago, they divorced.

But it is undoubtedly the children who suffer the most.

‘You become the carer,’ says Tracey Smith, a 43-year-old author and mother-of-three from West Dorset, whose mother used to drink a litre of Bacardi every day and eventually died from a heart attack.

‘I was the oldest one, so I protected my brother from the worst of it. I cleaned his clothes, tidied up the house, covered up for mum. I used to buy washing powder with my pocket money on the way home from school, so I could wash mine and my younger brother’s school uniform.

‘We never invited friends home, as we didn’t know what state mum would be in. Often she’d slur her words, or she’d stumble or not be able to focus her eyes.

‘The tell-tale signs were always there. We’d find empty Bacardi bottles in the toilet cistern.’

While Tracey’s father tried to ignore the situation, his daughter was desperate to make her mother better.

‘I couldn’t understand why she could not stop, if she loved us,’ she says. ‘I felt such a failure as a child, because I could not stop my mother raising a glass to her mouth. I felt we were so different from everyone else, and I couldn’t wait to leave.’

Government statistics show a marked rise in female alcohol consumption over the past ten years.

Binge drinking among women has almost doubled, from eight per cent of all women in Britain in 1998 to 15 per cent in 2006. Figures for male drinkers have barely changed over the same period.

The increase is blamed on the huge surge in wine drinking among women as well as the influence of advertising and the availability of cheap alcohol in supermarkets.

According to Don Shenker, Chief executive of Alcohol Concern, the damage that alcohol dependency has on a family can be incalculable. There is often a culture of secrecy and denial, with children reluctant or unable to talk about the problems, and they often won’t ask friends to come round and play because they are fearful of what they may find.’

But while female alcohol consumption continues to rise, it seems inevitable that more and more children will be affected by their mothers’ drinking. Emma Spiegler of COAP says she would like to see more education about addiction and the way it affects children’s lives.

She already visits schools talking about her own experiences as the daughter of an alcoholic mother.

Most worrying of all is the reaction she gets from the children she speaks to.

‘For every school I go to, one or two children from the class will come up to me and say: “This is affecting me,”‘ she says.

Posted in Alcoholism and tagged alcohol, alcoholism
← It Is Never Too Late To Stop DrinkingUse of prescribed drugs to treat alcohol addiction →