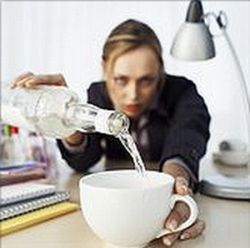 Even though many people use alcohol to ease stress, there is evidence that it does just the opposite – especially when it comes to stressing the liver.

Stress can be defined, experienced and handled in a countless number of ways, but most health experts agree that continual stress is harmful to the liver. Unfortunately, a customary response to stress is even more hazardous to the liver. Both animal and human research has found that drinking alcohol is a common coping mechanism for stress, with the misconstrued belief that it will ease stress. Unfortunately, consuming alcohol for stress relief acts as a double whammy to the liver’s well-being.

Stress and the Liver

Stress describes the body’s wear and tear in reaction to everyday tensions and pressures. When someone’s reaction to a stressful event is expressed as resistance, tension, strain or frustration, the ability to cope with the stress diminishes. Healthcare professionals uniformly agree that an inability to manage stress lays at the heart of many health problems. Confirming this association, the American Institute of Stress claims that up to 90 percent of all health problems are related to stress.

As published in the January 2006 edition of the Journal of Gastroenterology and Hepatology, Y. Chida and colleagues published the review “Does Stress Exacerbate Liver Disease?” The investigators found that fear and anxiety significantly decrease the flow of blood through the liver. In addition, they observed that stress can aggravate inflammation in the liver, a precursor to liver cell damage. To explain their findings, Chida and colleagues proposed that during stress, natural killer cells are expanded in the liver, which can contribute to liver cell death and the worsening of liver disease.

Alcohol and the Liver

It is no secret that alcohol is harmful to the liver, but here is a more accurate picture of what actually happens:

•    After swallowing alcohol, about 25 percent of the alcohol is absorbed immediately from the stomach directly into the bloodstream.

•    The remaining 75 percent makes its way to the small bowel where it then gets absorbed in the blood.

•    Once in the bloodstream, alcohol remains in the body until it is metabolized.

•    Alcohol is mostly metabolized in the liver by the enzyme alcohol dehydrogenase (ADH).

•    ADH breaks down alcohol into acetaldehyde.

•    The substance responsible for feeling drunk, acetaldehyde is highly toxic.

The Harm of Stress and Alcohol

Being that stress and alcohol both harm the liver, it’s unsettling to realize that many people consider alcohol to be a remedy for stress. A new poll from British alcohol education charity Drinkaware reveals that the average adult cites a bad or stressful day as an excuse to consume up to four drinks on a typical evening at home.

Although tension may appear to dissolve with alcohol consumption, some research demonstrates that alcohol actually induces the stress response by stimulating hormone release by the hypothalamus, pituitary and adrenal glands. In one study, the administration of alcohol initiated the physiological stress response, measured by increased levels of corticosterone. In addition to stimulating the hormonal stress response, chronic exposure to alcohol also results in an increase in adrenaline – a chemical release that is the opposite of relaxation.

A study in the journal Alcoholism: Clinical & Experimental Research further confirms the concept that alcohol can add to stress. The study found that stress can reduce the intoxicating effects of alcohol, causing people to drink more to produce the same effect. According to study author Emma Childs, a research associate at the University of Chicago, drinking could make some people feel worse and prolong their stress when they think it will relieve tension. Childs said, “Alcohol can change the way that the body deals with stress: it can decrease the hormone cortisol, which the body releases to respond to stress, and it can prolong the feelings of tension produced by the stress.”

Being stressed and drinking alcohol serves as a one-two punch to the liver’s health. With this kind of evidence, it’s hard to miss the irony in the popular habit of relaxing with an alcoholic beverage. By indulging in alcohol to cope with stress, not only is the stress compounded, but the liver suffers way more than it should.

Posted in Alcoholism and tagged alcohol, cirrhosis, stress
← Challenging Old Assumptions About AlcoholismIt Is Never Too Late To Stop Drinking →