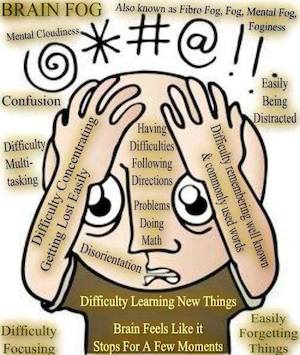 Most of us take our ability to think, remember and process information for granted. We consider our brain to be the headquarters of our intelligence and personality, that is, unless something interferes with our mental acuity. Generally termed ‘brain fog,’ the dulling of cognitive function is a familiar, but unwelcome sensation to a majority of people. For some, brain fog is a mild, transient occurrence; but for others, brain fog can be a major source of strife. Although there are several possible reasons for this condition, those with chronic liver problems are especially susceptible to brain fog.

What Is Brain Fog?

Despite the lack of information in most medical and psychological texts, brain fog is a valid, sometimes debilitating complaint. Describing mental confusion or a lack of mental clarity, brain fog can include feeling spacey, forgetful, lost and fatigued. It is also associated with having trouble thinking, concentrating and focusing. The frequency and severity of someone’s brain fog can vary significantly – and have a host of different causes.

Although the following three etiologies are not the only reasons someone experiences cognitive impairment, they do account for a sizeable proportion of brain fog episodes:

Low on Fuel – Requiring a lot of energy, the brain consumes approximately 30 percent of our caloric intake. Anything that impairs energy production can lead to insufficient fuel for optimal brain function.

Low on Fluid – As a major constituent of the human body, nearly every human function requires water. About 70 percent of the brain is composed of water. If the brain’s cells are not properly hydrated, cognitive function declines.

Excess Toxins – The brain requires a lot of blood flow to function, making it one of the first organs to be affected by toxins in the bloodstream. Any condition that impairs the filtering of toxins out of the blood encourages brain fog.

Despite being frequently dismissed as a vague, unimportant complaint, brain fog is one of the more common symptoms of chronic liver disease. This is likely due to liver disease’s tendency to impair energy production and blood detoxification.

Detoxification – One of the liver’s most vital responsibilities is filtering toxins out of the blood. When battling chronic liver disease, the liver can accumulate scars – some of which may become permanent. The more scarred a liver becomes, the less effective it is at removing toxins from the blood supply.

Energy Production – Another prime responsibility of the liver is its role in carbohydrate metabolism. The liver converts carbohydrates into glucose and glycogen. Glucose is used instantly for energy and glycogen is stored by the liver to be used later for energy. The more damage to the liver incurred from chronic liver disease, the less able this organ is to produce and store energy.

A combination of toxins in the bloodstream and lowered energy levels make brain fog a likely consequence of chronic liver disease. Thankfully, there is hope for those affected. For the majority of folks, strategies to stay properly hydrated, minimize toxin exposure and provide the brain with sufficient energy are crucial to having a clear head. In addition, those with liver concerns can benefit from supporting the liver’s ability to detoxify and produce energy – a solid recipe for easing the fatigue, disorientation and frustration characteristic of brain fog.