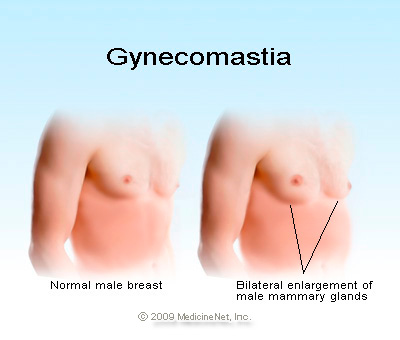 Gynecomastia is enlargement of the glandular tissue of the male breast.

The condition may occur during infancy and puberty in normally developing boys.

Gynecomastia results from an imbalance in the hormonal environment in the body, with a relative excess of estrogens (female hormones) when compared to androgens (male hormones).

The causes of the gynecomastia can result as a side effect of numerous medications and drugs of abuse, for example:

True gynecomastia is an enlargement of the male breast gland because of a hormonal imbalance, but the appearance of enlarged may breasts may be ascribed to pseudogynecomastia, a symptom of excess fat which deposits on the chest.

It can be common and temporary in boys going through puberty

Treatment of gynecomastia may involve medication or surgery.

Gynecomastia is enlargement of the glandular tissue of the male breast. During infancy, puberty, and in middle-aged to older men, gynecomastia can be common. Gynecomastia must be distinguished from pseudogynecomastia or lipomastia, which refers to the presence of fat deposits in the breast area of obese men.

True gynecomastia results from growth of the glandular, or breast tissue, which is present in very small amounts in men. The condition is the most common reason for medical evaluation of the male breast.

Normally developing pubertal males may be at risk for gynecomastia that is part of the normal developmental process. Normal male infants also may have gynecomastia.

Other risk factors include:

Aging, since aging may promote decreases in testosterone production that can cause the problem.

The risks for developing enlarged male breasts related to specific diseases and conditions (such as cirrhosis of the liver) are the same risk factors that predispose to those conditions.

The primary symptom of gynecomastia is enlargement of the male breasts. As mentioned before, gynecomastia is the enlargement of glandular tissue rather than fatty tissue. It is typically symmetrical in location with regard to the nipple and may have a rubbery or firm feel. Gynecomastia usually occurs on both sides but can be unilateral in some cases.

The enlargement may be greater on one side even if both sides are involved. Tenderness and sensitivity may be present, although there is typically no severe pain.

The most important distinction with gynecomastia is differentiation from male breast cancer, which accounts for about 1% of overall cases of breast cancer. Usually, cancer is confined to one side, is not necessarily centered around the nipple, feels hard or firm, and can be associated with dimpling of the skin, retraction of the nipple, nipple discharge, and enlargement of the underarm (axillary) lymph nodes.

What causes gynecomastia during puberty? How long does it last?

Gynecomastia results from an imbalance in hormone levels in which levels of estrogen (female hormones) are increased relative to levels of androgens (male hormones). Gynecomastia that occurs in normally growing infant and pubertal boys that resolves on its own with time is known as physiologic gynecomastia.

All individuals, whether male or female, possess both female hormones (estrogens) and male hormones (androgens). During puberty, levels of these hormones may fluctuate and rise at different levels, resulting in a temporary state in which estrogen concentration is relatively high. Studies regarding the prevalence of gynecomastia in normal adolescents have yielded widely varying results, with prevalence estimates as low as 4% and as high as 69% of adolescent boys. These differences probably result from variations in what is perceived to be normal and the different ages of boys examined in the studies.

Gynecomastia caused by transient changes in hormone levels with growth usually disappears on its own within six months to two years. Occasionally, gynecomastia that develops in puberty and persists beyond two years is referred to as persistent pubertal gynecomastia.

What diseases and conditions cause gynecomastia?

A number of medical conditions may also result in gynecomastia:

Disorders of the male sex organs (testes) can result in decreased testosterone production and relatively high estrogen levels, leading to gynecomastia. These disorders may be genetic, such as Klinefelter's syndrome or acquired due to trauma, infection, reduced blood flow, or aging. Testicular cancers may also secrete hormones that cause gynecomastia.

What medications cause gynecomastia?

Gynecomastia can be a side effect of many medications, for example:

Spironolactone (Aldactone), a diuretic that has anti-androgenic activity

Highly active anti-retroviral therapy (HAART) for HIV disease, which may cause fat redistribution leading to pseudogynecomastia or, in some cases, true gynecomastia

Drugs of abuse (for example, alcohol, marijuana, heroin)
Lavender oil and tea tree oil, when used in skin-care products, have been associated with gynecomastia

It is appropriate to consult a doctor or other healthcare professional if you think you may be developing or have the condition.

How do I know if I have gynecomastia (diagnosis)?

In most cases, gynecomastia can be diagnosed by a physical examination. A careful medical history is also important, including medication and drug use. If there is a suspicion of cancer, a mammogram may be ordered by a health care practitioner. Further tests may be recommended to help establish the cause of gynecomastia in certain cases. These can include blood tests to examine liver, kidney, and thyroid function. Measurement of hormone levels in the bloodstream may also be recommended in some cases.

How long does it take for gynecomastia to go away?

Although pubertal gynecomastia typically regresses on its own, in rare cases it may persist, requiring treatment. Rarely, it may persist, which requires treatment. Gynecomastia that has been present over 12 months or more (long term) may undergo scarring (fibrosis), which makes treatment with medications much more difficult, if not impossible to achieve a response.

Psychological consequences can occur if the breast enlargement is pronounced or is a source of embarrassment.

What drugs are used for the treatment of gynecomastia?

Gynecomastia, especially in pubertal males, often goes away on its own within about six months, so observation is preferred over specific treatment in many cases. Stopping medications and treatment of existing medical problems or health conditions that cause enlarged breasts in men also are mainstays of treatment.

Medical treatments are available to treat gynecomastia, but data on their effectiveness are limited. No drugs have been approved by the FDA for the treatment of gynecomastia; however, medications that have been used to treat the condition include:

Testosterone replacement has been effective in older men with low levels of testosterone, but it is not effective for men who have normal levels of the male hormone.

Clomiphene can be used to treat gynecomastia. It can be taken for up to 6 months.

The selective estrogen receptor modulator (SERM) tamoxifen (Nolvadex) has been shown to reduce breast volume in gynecomastia, but it was not able to entirely eliminate all of the breast tissue. This type of therapy often is most used for severe or painful gynecomastia.

Danazol is a synthetic derivative of testosterone that decreases estrogen synthesis by the testes. It works by inhibition of pituitary secretion of LH and follicle-stimulating hormone (FSH), substances that direct the sex organs to produce hormones. It is less commonly used to treat gynecomastia than other medications.

What about surgery for the treatment of gynecomastia? Can it be cured?

Medications are more effective in reducing gynecomastia in the early stages, since scarring often occurs after about 12 months. After the tissue has become scarred, medications are not likely to be effective, and surgical removal is the only possible treatment.

Reduction mammoplasty (breast reduction surgery) has been used in severe cases of the condition, long-term gynecomastia, or in cases in which drug therapies have not been effective to help restore a normal breast appearance.

Typically, gynecomastia is not associated with long-term problems.

Men with gynecomastia have about a five-fold greater risk for developing male breast cancer when compared with the general population. It is believed that the gynecomastia itself is not a precancerous condition, but rather that the hormonal changes (relative increase in estrogens, lower levels of androgens) that produce gynecomastia in adult men also increase their risk of developing breast cancer.

Can gynecomastia be prevented?

Posted in What Is? and tagged gynecomastia
← Diet, Nutrition and the Prevention of Chronic DiseasesTurmeric’s Properties Put Chemo & Radiation To Shame →