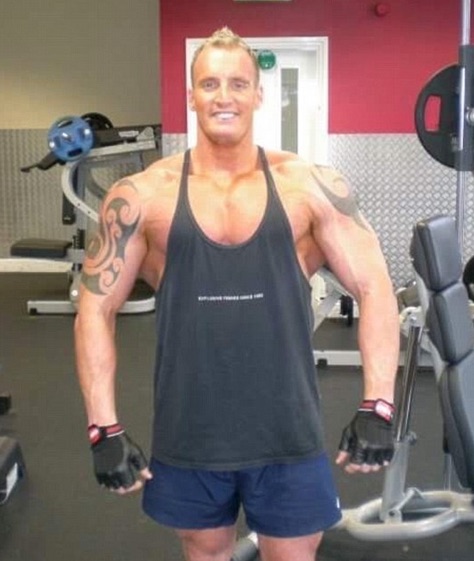 Shocking transformation of ex-bodybuilder given just three weeks to live after being diagnosed with liver cancer which he blames on 10,000 calorie per day pizza and energy drink diet

By Jenny Stanton and Flora Drury For Mailonline

A former bodybuilder given just three weeks to live has revealed how he blames his 10,000 calorie a day diet and energy drink addiction on his terminal diagnosis – but hopes to turn it all around with his new, healthier lifestyle.

Dean Wharmby was told he had just weeks to live in November after a large tumour was found on his liver.

But he is still battling the disease five-and-a-half months later, thanks, he believes, to cutting out sugar and relying on natural remedies.

It is a huge turn-around for the 39-year-old, who turned to a diet of burgers, pizzas and bacon sandwiches – washed down with seven to eight cans of energy drink – to create the ‘perfect’ bodybuilder’s physique. The former bodybuilder from Rochdale, Greater Manchester, ate 10,000 calories a day as he tried to get bigger But Dean Wharmby now believes his high-protein, high-fat diet may be ‘a contributing fator’ which cause his illness. Pictured: Mr Wharmby before he go sick (left), and afterwards (right) Mr Wharmby was given three weeks to live by doctors in November but – after committing to a healthy diet, which completely cuts out sugar – he has lived for a further five-and-a-half months

But he now believes the high-protein, fatty diet he lived on for four to five years may have led to his illness, first diagnosed in 2010.

‘It was because I was trying to be as big as possible,’ Mr Wharmby told MailOnline.

‘I can’t say it was the diet for sure, but things like the energy drinks could be contributing factors. Red meats – all things we have found out have so many impurities in them now.

‘I think it was a combination of it all.’

Mr Wharmby had been a  bodybuilder for 20 years before he became ill.

In the beginning, he admits to taking steroids for about a year to create his physique because ‘everybody did it’.

But he soon turned his back on them, as he began to build his personal training business.

It was then his diet took a turn for the worse.

‘I could train seven clients in a day, back-to-back,’ he said. ‘Then I would have to have the energy to train myself.’

He added: ‘I was constantly on the go.’ Dean Wharmby was on a high-calorie diet for four to five years, as he tried to get make his body as big as possible. Here, he reveals what he ate during an average day.

Breakfast: An entire pack of bacon, made into eight sandwiches and a protein shake 2,500 calories Dinner: Chips or rice with three chicken breasts or a steak 783 calories

But that is not all:

Overnight, Dean used to wake up every two hours to eat either a full pack of Jaffa Cakes, a jar of peanut butter, or more protein bars – pushing him over the 10,000 calorie-a-day mark Some days, he would see seven clients back-to-back – and would fit eating every two hours around them

Mr Wharmby found the energy from seven to eight cans of energy drink while eating every two hours.

And while some of it was typical bodybuilder fare – protein shakes, eggs and chicken – other bits were less conventional.

Mr Wharmby would grab a McDonalds for a snack, and a pizza on the way home – which he would eat while his girlfriend of five years cooked dinner.

But then the personal trainer from Rochdale, Greater Manchester, became unwell five-and-a-half years ago, and doctors discovered a growth. He was offered chemotherapy and a liver transplant, but he decided to turn both down in favour of natural remedies.

‘I refused it from day one,’ he said. ‘The main reason why I chose to do natural instead of artificial was because I wanted to live. I didn’t want to die.’

But that meant he needed to completely rethink his diet, which was full of things like acids – which he believes help cancers thrive.

And for a year, it was successful: Mr Wharmby’s tumour disappeared.

‘But I got complacent,’ he admitted. ‘The old lifestyle crept in again.’

In 2013, he collapsed outside the gym where he was working as a trainer, and rushed to hospital.

For the majority of the next year, he returned to his healthy regime.

But then things started to go wrong: he broke up with his girlfriend briefly, and found himself homeless – making it hard to concentrate on getting better.

By November, he was in hospital ‘hooked up to every machine you could think of’.

Doctors said he had just three weeks to live. The tumour had got too big to operate, and there was little the doctors felt they could do.

‘I was offered chemotherapy, but doctors basically said there was no point,’ Mr Wharmby said. Mr Wharmby, at his heaviest, weighed 20 stone – something he admits was also not good for his body Mr Wharmby and Miss Rigby, who have been together for five years, hope to inspire others with his new diet

CAN DIET CAUSE LIVER CANCER?

It is not known exactly what causes liver cancer, but research has suggested diet could be a factor.

Non-alcoholic fatty liver disease – which is associated with obesity and type 2 diabetes – has been linked to cases of liver cancer.

The disease occurs when small deposits of fat build up in the tissue.

But while it is a common condition, in some cases, with people who have high levels of fat the liver can become inflamed.

This can scar the liver over time – causing cirrhosis, which is linked to many cases of liver cancer.

Energy drinks, meanwhile, have been linked to cases of bowel cancer by scientists in Scotland, according to The Scotsman.  It was also reported earlier this year that some energy drinks have as many as 20 teaspoons of sugar in them.

So he and girlfriend Charlotte Rigby – his ‘rock’ – began his healthy regime once more.

They also began fundraising to help pay for the treatment costs and have attracted more than 2,000 likes on Facebook by regularly posting videos of his progress.

He has also visited a doctor in London – and is hoping to shrink his tumour by using natural medicine.

Mr Wharmby is also hoping to inspire others through social media to live more healthily.

Ms Rigby, 27, said: ‘There are lots of examples out there of people beating cancer naturally, even when they’ve been told there’s nothing conventional medicine can do for them.

‘The support Dean has received has really lifted him. People have been so positive and it has really made a difference to his attitude.

‘Now he’s determined to inspire others to live more healthily.’

Mr Wharmby added: ‘It has been very difficult but I’m 100 per cent determined to beat this.