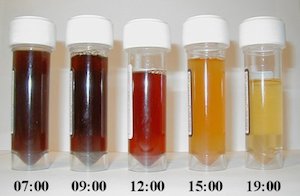 Urine that is orange, amber or brown might signify liver disease. Know what you can rule out and which other symptoms might point to the same conclusion.

Liver disease is becoming one of the most common problems of our modern society, yet has few recognizable symptoms. Unfortunately, liver disease symptoms typically appear only when the illness has advanced to one of the later, irreversible stages. Thus, recognizing a potential problem with the liver via simple observation is extremely valuable. Observing the color of your urine is a reasonable way to be alerted that your liver’s health might be in jeopardy.

It is normal for the color of pee to vary throughout the day, changing based on how much fluid you’ve had, and what foods and medications you’ve ingested. Even so, observing dark-colored urine should serve as an alert that something is off. In general, dark urine could be a signal that the liver is struggling to function properly. When referencing dark-colored urine, the following colors are implied:

Besides a liver problem, other possible reasons for dark colored urine include:

Dehydration – The darker the urine, the more dehydrated you might be.
Eating certain foods like rhubarb, aloe and fava beans.
B Vitamins – Although this typically results in bright orange urine.
Medications like rifampin, pyridium, laxatives with cascara or senna, sulfasalazine, some chemotherapy drugs, medications for malaria such as primaquine and chloroquine, the antibiotics nitrofurantoin and metronidazole, and methocarbamol.
Urinary Tract Infection.
Kidney Problem.

If none of these six possible causes of dark urine are applicable, liver function might be compromised. Most liver diseases have a better prognosis the earlier they are detected and treated. Thus, swift diagnostics (prompted by recognizing dark urine) could potentially be life-saving. Although symptoms are rare in the beginning stages, other symptoms of liver disease might include:

Dark urine can be the result of a problem with the liver or bile ducts, especially if accompanied by lighter-than-normal stools. Dark urine and light stools are one of the ways to detect jaundice, when there is too much bilirubin in the body. Outwardly, jaundice is recognized as a yellowing of the skin and whites of the eyes, but what we excrete is also revealing.

Bilirubin is a yellow pigment that is formed by the breakdown of dead red blood cells in the liver. Jaundice occurs when the liver doesn’t break down bilirubin properly. Jaundice arises for one of these reasons:

The liver is damaged and can’t break down bilirubin.
The bilirubin can’t make it to the digestive tract to be removed in stool.
There may be too much bilirubin trying to enter the liver at once.
Too many red blood cells may be dying at the same time.

While orange or brownish urine can have a multitude of causes, liver disease must be ruled out. Cirrhosis, hepatitis, pancreatic cancer, pancreatitis, bile duct cancer or blockage and alcoholic liver disease all are known to cause dark urine. Thus, observing cola-colored pee without understanding its etiology should result in a quick referral to a doctor. Only then can liver disease either be ruled out or treated as soon as possible.

Posted in Cirrhosis Symptoms and tagged liver, symptoms, urine
← The Importance of Bile Flow and Liver HealthWho Should Read This? →