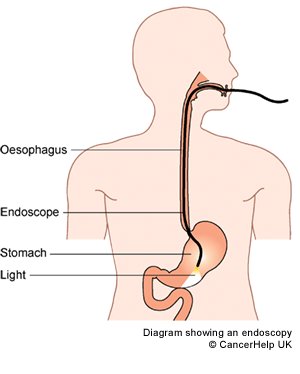 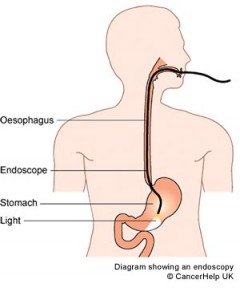 What is an Endoscopy?

From Wikipedia, the free encyclopedia

A physician using an endoscope

Endoscopy means looking inside and typically refers to looking inside the body for medical reasons using an endoscope, an instrument used to examine the interior of a hollow organ or cavity of the body. Unlike most other medical imaging devices, endoscopes are inserted directly into the organ. Endoscopy can also refer to using a borescope in technical situations where direct line of-sight observation is not feasible.

An endoscope can consist of:

a rigid or flexible tube
a light delivery system to illuminate the organ or object under inspection. The light source is normally outside the body and the light is typically directed via an optical fiber system
a lens system transmitting the image from the objective lens to the viewer, typically a relay lens system in the case of rigid endoscopes or a bundle of fiberoptics in the case of a fiberscope
an eyepiece
an additional channel to allow entry of medical instruments or manipulators.

A health care provider may use endoscopy for any of the following:

investigation of symptoms, such as symptoms in the digestive system including nausea , vomiting , abdominal pain , difficulty swallowing and gastrointestinal bleeding [1]
confirmation of a diagnosis, most commonly by performing a biopsy to check for conditions such as anemia , bleeding, inflammation , cancers of the digestive system .[1]
giving treatment, such as cauterization of a bleeding vessel, widening a narrow esophagus, clipping off a polyp or removing a foreign object[1]

Specialty professional organizations which specialize in digestive problems advise that many patients with Barrett’s esophagus are too frequently receiving endoscopies.[2] Such societies recommend that patients with Barrett’s esophagus and no cancer symptoms after two biopsies receive biopsies as indicated and no more often than the recommended rate.[3][4]

Health care providers can use endoscopy to review any of the following body parts:

The gastrointestinal tract (GI tract):
The respiratory tract
The ear (otoscope )
The urinary tract (cystoscopy )
The female reproductive system (gynoscopy)
Normally closed body cavities (through a small incision):
The abdominal or pelvic cavity (laparoscopy )
The interior of a joint (arthroscopy )
Organs of the chest (thoracoscopy and mediastinoscopy )
During pregnancy
Plastic Surgery
Panendoscopy (or triple endoscopy)
Orthopedic surgery
Endodontic surgery
Non-medical uses for endoscopy
The planning and architectural community have found the endoscope useful for pre-visualization of scale models of proposed buildings and cities (architectural endoscopy )
Internal inspection of complex technical systems (borescope )
Endoscopes are also a tool helpful in the examination of improvised explosive devices by bomb disposal personnel.
The FBI uses endoscopes for conducting surveillance via tight spaces.

An Endoscopy is a simple procedure which allows a doctor to look inside human bodies using an instrument called an endoscope. A cutting tool can be attached to the end of the endoscope, and the apparatus can then be used to perform surgery. This type of surgery is called Key hole surgery, and usually leaves only a tiny scar externally.

The first endoscope was developed in 1806 by Philipp Bozzini in Mainz with his introduction of a “Lichtleiter” (light conductor) “for the examinations of the canals and cavities of the human body”.[5] However, the Vienna Medical Society disapproved of such curiosity.. The use of electric light was a major step in the improvement of endoscopy. The first such lights were external. Later, smaller bulbs became available making internal light possible, for instance in a hysteroscope by Charles David in 1908[citation needed ]. Hans Christian Jacobaeus has been given credit for early endoscopic explorations of the abdomen and the thorax with laparoscopy (1912) and thoracoscopy (1910)[citation needed ]. Laparoscopy was used in the diagnosis of liver and gallbladder disease by Heinz Kalk in the 1930s[citation needed ]. Hope reported in 1937 on the use of laparoscopy to diagnose ectopic pregnancy [citation needed ]. In 1944, Raoul Palmer placed his patients in the Trendelenburg position after gaseous distention of the abdomen and thus was able to reliably perform gynecologic laparoscopy[citation needed ].

Georg Wolf (1873–1938) a Berlin manufacturer of rigid endoscopes, established in 1906, produced the Sussmann flexible gastroscope in 1911(Modlin,Farhadi-Journal of Clinical Gastroenterology, 2000). Karl Storz began producing instruments for ENT specialists in 1945. His intention was to develop instruments which would enable the practitioner to look inside the human body.

The technology available at the end of the Second World War was still very modest: The area under examination in the interior of the human body was illuminated with miniature electric lamps; alternatively, attempts were made to reflect light from an external source into the body through the endoscopic tube. Karl Storz pursued a plan: He set out to introduce very bright, but cold light into the body cavities through the instrument, thus providing excellent visibility while at the same time allowing objective documentation by means of image transmission.

With more than 400 patents and operative samples to his name, which were to play a major role in showing the way ahead, Karl Storz played a crucial role in the development of endoscopy. It was however, the combination of his engineering skills and vision, coupled with the work of optical designer Harold Hopkins that ultimately would revolutionize the field of medical optics.

Use of fiber optics

Basil Hirschowitz and Larry Curtiss invented the first fiber optic endoscope in 1957.[6] Earlier in the 1950s Harold Hopkins had designed a “fibroscope” consisting of a bundle of flexible glass fibres able to coherently transmit an image. This proved useful both medically and industrially, and subsequent research led to further improvements in image quality. Further innovations included using additional fibres to channel light to the objective end from a powerful external source, thereby achieving the high level of full spectrum illumination that was needed for detailed viewing, and colour photography.

The previous practice of a small filament lamp on the tip of the endoscope had left the choice of either viewing in a dim red light or increasing the light output – which carried the risk of burning the inside of the patient. Alongside the advances to the optical side, the ability to ‘steer’ the tip was developed, as well as innovations in remotely operated surgical instruments contained within the body of the endoscope itself. This was the beginning of “key-hole surgery” as we know it today.

There were physical limits to the image quality of a fibroscope. A bundle of say 50,000 fibers gives effectively only a 50,000-pixel image, and continued flexing from use breaks fibers and so progressively loses pixels. Eventually so many are lost that the whole bundle must be replaced (at considerable expense). Hopkins realised that any further optical improvement would require a different approach. Previous rigid endoscopes suffered from low light transmittance and poor image quality. The surgical requirement of passing surgical tools as well as the illumination system within the endoscope’s tube – which itself is limited in dimensions by the human body – left very little room for the imaging optics. The tiny lenses of a conventional system required supporting rings that would obscure the bulk of the lens area; they were difficult to manufacture and assemble and optically nearly useless.

The elegant solution that Hopkins produced (in the late 1960s) was to fill the air-spaces between the ‘little lenses’ with rods of glass. These fitted exactly the endoscope’s tube, making them self-aligning, and required no other support. This allowed the little lenses to be dispensed with altogether. The rod-lenses were much easier to handle and used the maximum possible diameter available. With the appropriate curvature and coatings to the rod ends and optimal choices of glass-types, all calculated and specified by Hopkins, the image quality was transformed – even with tubes of only 1mm in diameter. With a high quality ‘telescope’ of such small diameter the tools and illumination system could be comfortably housed within an outer tube. Once again it was Karl Storz who produced the first of these new endoscopes as part of a long and productive partnership between the two men.

Whilst there are regions of the body that will always require flexible endoscopes (principally the gastrointestinal tract), the rigid rod-lens endoscopes have such exceptional performance that they are still the preferred instrument and have enabled modern key-hole surgery. (Harold Hopkins was recognized and honoured for his advancement of medical-optic by the medical community worldwide. It formed a major part of the citation when he was awarded the Rumford Medal by the Royal Society in 1984.)

Disinfection is essential for all types of endoscopes. The first disinfection device was constructed by S.E.Miederer in 1976 at the University of Bonn in Germany.

The main risks are perforation, or a tear, of the stomach or esophagus lining and bleeding. Although perforation generally requires surgery, certain cases may be treated with antibiotics and intravenous fluids. Bleeding may occur at the site of a biopsy or polyp removal. Such typically minor bleeding may simply stop on its own or be controlled by cauterisation. Seldom does surgery become necessary.

Perforation and bleeding are rare during gastroscopy.

Other minor risks include drug reactions and complications related to other diseases the patient may have. Consequently, patients should inform their doctor of all allergic tendencies and medical problems.

Occasionally, the site of the sedative injection may become inflamed and tender for a short time. This is usually not serious and warm compresses for a few days are usually helpful.

While any of these complications may possibly occur, it is good to remember that each of them occurs quite infrequently.

A doctor can further discuss risks with the patient with regard to the particular need for gastroscopy.

After the procedure the patient will be observed and monitored by a qualified individual in the endoscopy room or a recovery area until a significant portion of the medication has worn off. Occasionally the patient is left with a mild sore throat, which may respond to saline gargles, or chamomile tea. It may last for weeks or not happen at all. The patient may have a feeling of distention from the insufflated air that was used during the procedure. Both problems are mild and fleeting. When fully recovered, the patient will be instructed when to resume their usual diet (probably within a few hours) and will be allowed to be taken home. Because of the use of sedation, most facilities mandate that the patient be taken home by another person and that he or she not drive or handle machinery for the remainder of the day.

With the application of robotic systems, telesurgery was introduced as the surgeon could be at a site far removed from the patient. The first transatlantic surgery has been called the Lindbergh Operation .

Disposable endoscopy is an emerging category of endoscopic instruments. Recent developments[7] have allowed the manufacture of endoscopes cheap enough to be used on a single patient only. It is meeting a growing demand to lessen the risk of cross contamination and hospital acquired diseases. A European consortium of SME are working on the DUET project to build a disposable endoscope.[8]

The endoscopic image can be combined with other image sources to provide the surgeon with additional information. For instance the position of an anatomical structure or tumor might be shown in the endoscopic video.[11]

Current research works on the endoscopic collection of dimensional 3D-data, for instance using laser triangulation or the approach of structured light projection . Depending on the used optics technical inner geometries can be measured with accuracies in the low µm-area.