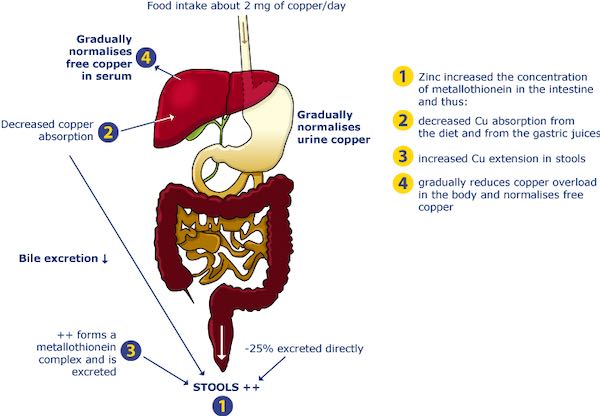 The clinical observable characteristics of Wilson’s disease (WD) are extremely variable ranging from asymptomatic to chronic liver disease to neurologic or psychiatric signs.

Symptoms typically start in the first decades of life, and the majority of cases occur between five and 35 years, but there are also exceptions. The youngest patient with cirrhosis was reported to be three years old; and the oldest could be siblings in their eighth decade of life.

The clinical sign, histologic, biochemical features, and mutation analysis of ATP7B that characterise — enable diagnosis of this WD. These include the presence of abnormal signs of liver or neurologic disease and detection of Kayser-Fleischer rings, low ceruloplasmin, elevated urine and hepatic copper, and associated histologic changes in the liver.

Reduction in ATP7B function results in decreased biliary copper excretion with increased copper accumulation in hepatic and extrahepatic tissues that leads to the clinical features of WD.

The diagnosis should be based on evidence derived from the patient’s history, family history, physical, including neurologic, exams, laboratory tests for liver disease, ceruloplasmin and urine copper, liver biopsy histology and copper content determination, radiographic findings and, most importantly, molecular genetic testing.

The objectives of the treatment have to eliminate the copper’s build-up and counter the toxic effects. In this connection, the first treatment was British Anti-Lewisite (BAL), a compound countering of mustard gas  that was found to be a chelator of copper.

The oral treatment, d-penicillamine, is the recognised potential for this compound to chelate copper and induce cupriuria with high efficiency. The development of another chelating agent, trientine, was first used tetrathiomolybdate in humans, the compound was originally used by veterinarians for copper-poisoned sheep.

The use of zinc is also important — it blocks copper absorption — for treating WD. It has been in use for many patients. A very important historic milestone with respect to treatment of WD was the recognition that pre-emptive treatment could prevent the development of disease progression.

Medical therapies, including liver transplantation, can effectively treat the patients in advanced stage of the disease.

Posted in Other Symptoms and tagged copper, wilson's disease
← Why Liver Problems Require a Look at Celiac DiseaseAre You Deficient in Magnesium? →