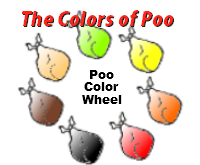 The Color of Poop

Reporting for doodie, Dr. Ellie Sattler plunges her hand into a pile of brontosaurus waste to find out what’s ailing the sick old beast in Jurassic Park. She could have spared herself the up-close and personal, if she had known how to read the colors of ka-ka.

When your body’s food processor isn’t functioning correctly, those colours can tell you what’s going on in your insides.

■ A medium-brown shade is the color of healthy poop.

■ Pale, gray, clay-like poop suggests a liver problem. Bile from the liver makes stools brown; not enough and you get ashy shades indicating anything from gallstones to hepatitis, pancreatitis to cirrhosis.

■ Black or dull-red poop sounds scary, but is often related to food or meds. You may see black after consuming black licorice, blueberries, iron pills or Pepto-Bismol. And red? That may come from beets and tomatoes.

■ Green stools aren’t just for St. Patrick’s Day, although they can be from celebratory beer (it’s the green dye). Greenies can also come from eating lots of green vegetables, taking iron or certain medications.

■ Bloody or maroon/red poop is most often caused by hemorrhoids, or it can be from intestinal bleeding; tarry black poop can be a sign of bleeding in the upper intestines or even the stomach. So call your doc. Anything from ulcers to colon cancer could be brewing.

If you’re worried about any other colours you’re dropping, keep a three-to-seven-day record and share the shades with your doctor.

Posted in Other Symptoms and tagged color, poop, stools
← Terrys Nails, Muehrcke’s NailsWhat Are the Treatments for Portal Hypertension? →