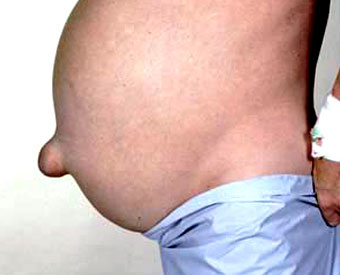 A hernia occurs when the contents of a body cavity bulge out of the area where they are normally contained. These contents, usually portions of intestine or abdominal fatty tissue, are enclosed in the thin membrane that naturally lines the inside of the cavity. Hernias by themselves may be asymptomatic (produce no symptoms) or cause slight to severe pain. Nearly all have a potential risk of having their blood supply cut off (becoming strangulated). When the content of the hernia bulges out, the opening it bulges out through can apply enough pressure that blood vessels in the hernia are constricted and therefore the blood supply is cut off. If the blood supply is cut off at the hernia opening in the abdominal wall, it becomes a medical and surgical emergency as the tissue needs oxygen which is transported by the blood supply.

Different types of abdominal-wall hernias include the following:

Inguinal (groin) hernia: Making up 75% of all abdominal-wall hernias and occurring up to 25 times more often in men than women, these hernias are divided into two different types, direct and indirect. Both occur in the groin area where the skin of the thigh joins the torso (the inguinal crease), but they have slightly different origins. Both of these types of hernias can similarly appear as a bulge in the inguinal area. Distinguishing between the direct and indirect hernia, however, is important as a clinical diagnosis.

Direct inguinal hernia: The direct inguinal hernia occurs slightly to the inside of the site of the indirect hernia, in an area where the abdominal wall is naturally slightly thinner. It rarely will protrude into the scrotum. Unlike the indirect hernia, which can occur at any age, the direct hernia tends to occur in the middle-aged and elderly because their abdominal walls weaken as they age.Femoral hernia: The femoral canal is the path through which the femoral artery, vein, and nerve leave the abdominal cavity to enter the thigh. Although normally a tight space, sometimes it becomes large enough to allow abdominal contents (usually intestine) to protrude into the canal. A femoral hernia causes a bulge just below the inguinal crease in roughly the mid-thigh area. Usually occurring in women, femoral hernias are particularly at risk of becoming irreducible (not able to be pushed back into place) and strangulated. Not all hernias that are irreducible are strangulated (have their blood supply cut off ), but all hernias that are irreducible need to be evaluated by a health-care provider.

Umbilical hernia: These common hernias (10%-30%) are often noted at birth as a protrusion at the bellybutton (the umbilicus). This is caused when an opening in the abdominal wall, which normally closes before birth, doesn’t close completely. If small (less than half an inch), this type of hernia usually closes gradually by age 2. Larger hernias and those that do not close by themselves usually require surgery at age 2-4 years. Even if the area is closed at birth, umbilical hernias can appear later in life because this spot may remain a weaker place in the abdominal wall. Umbilical hernias can appear later in life or in women who are pregnant or who have given birth (due to the added stress on the area).

Spigelian hernia: This rare hernia occurs along the edge of the rectus abdominus muscle through the spigelian fascia, which is several inches to the side of the middle of the abdomen.

Obturator hernia: This extremely rare abdominal hernia develops mostly in women. This hernia protrudes from the pelvic cavity through an opening in the pelvic bone (obturator foramen). This will not show any bulge but can act like a bowel obstruction and cause nausea and vomiting. Because of the lack of visible bulging, this hernia is very difficult to diagnose.

Epigastric hernia: Occurring between the navel and the lower part of the rib cage in the midline of the abdomen, epigastric hernias are composed usually of fatty tissue and rarely contain intestine. Formed in an area of relative weakness of the abdominal wall, these hernias are often painless and unable to be pushed back into the abdomen when first discovered.

Although abdominal hernias can be present at birth, others develop later in life. Some involve pathways formed during fetal development, existing openings in the abdominal cavity, or areas of abdominal-wall weakness.

Any condition that increases the pressure of the abdominal cavity may contribute to the formation or worsening of a hernia. Examples include

straining during a bowel movement or urination,

fluid in the abdominal cavity.

A family history of hernias can make you more likely to develop a hernia.

The signs and symptoms of a hernia can range from noticing a painless lump to the severely painful, tender, swollen protrusion of tissue that you are unable to push back into theabdomen (an incarcerated strangulated hernia).

It may appear as a new lump in the groin or other abdominal area.

It may ache but is not tender when touched.

Sometimes pain precedes the discovery of the lump.

The lump increases in size when standing or when abdominal pressure is increased (such as coughing).

It may be reduced (pushed back into the abdomen) unless very large.

It may be an occasionally painful enlargement of a previously reducible hernia that cannot be returned into the abdominal cavity on its own or when you push it.

Some may be chronic (occur over a long term) without pain.

An irreducible hernia is also known as an incarcerated hernia.

It can lead to strangulation (blood supply being cut off to tissue in the hernia).

Signs and symptoms of bowel obstruction may occur, such as nausea and vomiting.

This is an irreducible hernia in which the entrapped intestine has its blood supply cut off.

The affected person may appear ill with or without fever.

This condition is a surgical emergency.

When to Seek Medical Care

All newly discovered hernias or symptoms that suggest you might have a hernia should prompt a visit to the doctor. Hernias, even those that ache, if they are not tender and easy to reduce (push back into the abdomen), are not necessarily surgical emergencies, but all have the potential to become serious. Referral to a surgeon should generally be made so that the need for surgery can be established and the procedure can be performed as an elective surgery and avoid the risk of emergency surgery should your hernia become irreducible or strangulated.

If you find a new, painful, tender, and irreducible lump, it’s possible you may have an irreducible hernia, and you should have it checked in an emergency setting. If you already have a hernia and it suddenly becomes painful, tender, and irreducible, you should also go to the emergency department. Strangulation (cut off blood supply) of intestine within the hernia sac can lead to gangrenous (dead) bowel in as little as six hours. Not all irreducible hernias are strangulated, but they need to be evaluated.

If you have an obvious hernia, the doctor may not require any other tests (if you are healthy otherwise). If you have symptoms of a hernia (dull ache in groin or other body area with lifting or straining but without an obvious lump), the doctor may feel the area while increasing abdominal pressure (having you stand or cough). This action may make the hernia able to be felt. If you have an inguinal hernia, the doctor will feel for the potential pathway and look for a hernia by inverting the skin of the scrotum with his or her finger.

In general, all hernias should be repaired unless severe preexisting medical conditions make surgery unsafe. The possible exception to this is a hernia with a large opening. Trusses and surgical belts or bindings may be helpful in holding back the protrusion of selected hernias when surgery is not possible or must be delayed. However, they should never be used in the case of femoral hernias.

Avoid activities that increase intra-abdominal pressure (lifting, coughing, or straining) that may cause the hernia to increase in size.

Treatment of a hernia depends on whether it is reducible or irreducible and possibly strangulated.

In general, all hernias should be repaired to avoid the possibility of future intestinal strangulation.

If you have preexisting medical conditions that would make surgery unsafe, your doctor may not repair your hernia but will watch it closely.

Rarely, your doctor may advise against surgery because of the special condition of your hernia.

Some hernias have or develop very large openings in the abdominal wall, and closing the opening is complicated because of their large size.

These kinds of hernias may be treated without surgery, perhaps using abdominal binders.

Some doctors feel that the hernias with large openings have a very low risk of strangulation.

The treatment of every hernia is individualized, and a discussion of the risks and benefits of surgical versus nonsurgical management needs to take place between the doctor and patient.

All acutely irreducible hernias need emergency treatment because of the risk of strangulation.

An attempt to reduce (push back) the hernia will generally be made, often after giving medicine for pain and muscle relaxation.

If unsuccessful, emergency surgery is needed.

If successful, however, treatment depends on the length of the time that the hernia was irreducible.

If the intestinal contents of the hernia had the blood supply cut off, the development of dead (gangrenous) bowel is possible in as little as six hours.

In cases in which the hernia has been strangulated for an extended time, surgery is performed to check whether the intestinal tissue has died and to repair the hernia.

In cases in which the length of time that the hernia was irreducible was short and gangrenous bowel is not suspected, you may be discharged from the hospital.

To lower the risk of a hernia becoming irreducible or strangulated, the sooner a reducible hernia is repaired the better.

The risk varies with the location and size of the hernia and the length of time it has been present.

In general, hernias with large sac contents with a relatively small opening are more likely to become strangulated.

Hernias that have been present for many years may become irreducible.

These are short-term and usually treatable.

The hernia that comes back after initial surgical repair can be repaired by the same or an alternate method.

Complications include the following:

testicular damage on the affected side (rare).

Posted in Other Symptoms and tagged hernia
← Hepatorenal syndrome: Progressive renal failure in patients with cirrhosisHormone Imbalance – Check Your Liver →