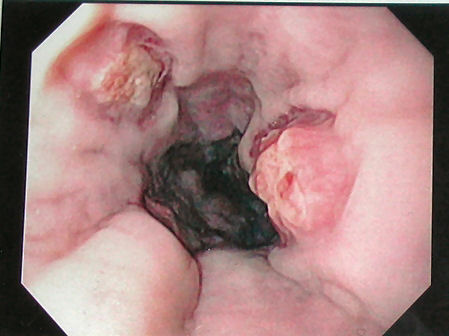 Study on TIPS for variceal hemorrhage

One hundred consecutive patients with recurrent or refractory acute variceal hemorrhage treated with a transjugular intrahepatic portosystemic shunt (TIPS) from June 1990 to June 1993 at Oregon Health Sciences University or the Portland Veterans Affairs Medical Center were evaluated to assess shunt patency and clinical outcome, including complications of TIPS, rebleeding, and survival.

Success of shunt placement, reduction in portal pressure, complications, survival, recurrent hemorrhage, severity of ascites, hepatic encephalopathy before and after TIPS, and shunt patency were assessed in each patient.

The mean follow-up period was 17.7 months (range, 0.1-56.7 months). TIPS was successfully completed in all patients, with a mean reduction in portosystemic gradient from 24 to 11 mm Hg.

Major complications occurred in 11 patients, including one death. Survival after TIPS was 85% at 30 days, 71% at 1 yr, and 56% at 2 yr. Variceal bleeding stopped within 24 hours after TIPS in all eight patients with active hemorrhage. Recurrent variceal hemorrhage occurred in 18 patients at a mean of 4.3 months (range, 1-713 days) after TIPS.

Seventy-three of 77 (95%) shunts examined for patency were open at the last follow-up examination. However, most shunts required intervention to maintain patency, and only 48% (37 of 77) were primarily patent at a mean of 168 days (range, 2-538 days) of follow-up.

Shunt stenosis or occlusion, as determined by venography, became increasingly frequent with longer follow-up (52% at 3-9 months and 70% at 9-15 months).

TIPS is effective in lowering elevated portal pressures in patients with refractory variceal hemorrhage, has acceptable postprocedure complication and mortality rates, ameliorates ascites, and in, a minority of patients, worsens encephalopathy.

Shunt stenosis occurs in the majority of patients but can be effectively treated by interventional techniques to maintain patency. The incidence of recurrent variceal hemorrhage is low and is associated with shunt stenosis or occlusion.

Posted in TIPS and tagged hemorrhage, shunt, variceal
← Study : Effects of TIPS with Portal Vein Thrombosis (PVT)The role of TIPS in the management of portal hypertension →