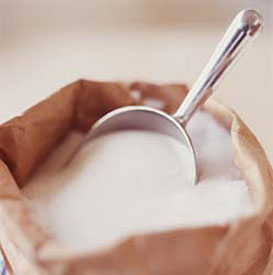 Any idea how much sugar you consume daily? If you have diabetes, high blood pressure, lipid problems, a sizeable girth, non-alcoholic fatty liver disease or heart disease you may be conscious of your sugar consumption.

If not, chances are that you can think of someone who has one or more of these conditions by the time you have finished reading this sentence. These illnesses are all part of a cluster known as chronic non-communicable diseases or lifestyle diseases.

They are, largely, a product of our habits and patterns of consumption. They are all indicative of metabolic dysfunction. In Guyana, there is an epidemic of diseases of the metabolic syndrome.

We are not, of course, unique. In 2010 a United Nations report revealed that, for the first time, more people worldwide were dying from lifestyle diseases rather than infectious diseases. There are, in fact, striking parallels between the current public health profiles in Guyana and America.

These parallels bear examination because we increasingly take our cultural cues from America. We build American-style houses, drive imported American cars and, as the shelves of our supermarkets attest, we have a special fondness for their processed food products and beverages.

It is not surprising then that our health profile is starting to resemble theirs. America is in the grip of an obesity epidemic: 75% of the US health-care spending is directed to treating metabolic syndrome diseases and attendant disabilities.

Sugar, in various forms, is a major contributor to this epidemic. Nor is it just sugary beverages or sugary snacks that are the culprits. Sugar, in some form, is in almost every processed product we consume. In February two public health experts and an expert in child obesity, Robert Lustig, published a paper in which they argued that sugar is a toxic and highly addictive substance and that its consumption should be regulated in the same way as tobacco and alcohol.

They focused particularly on “‘added sugar’, defined as any sweetener containing the molecule fructose that is added to food in processing.” The scientists advanced this somewhat startling proposition: “a growing body of scientific evidence is showing that fructose can trigger processes that lead to liver toxicity and a host of other chronic diseases.

A little is not a problem, but a lot kills – slowly.” Sugar, they added, “induces all of the diseases associated with the metabolic syndrome.” Like tobacco and alcohol, it “acts on the brain to encourage subsequent intake.”

“Evolutionarily, sugar as fruit was available to our ancestors for only a few months a year (at harvest time), or as honey, which was guarded by bees. But in recent years, sugar has been added to virtually every processed food, limiting consumer choice. Nature made sugar hard to get; man made it easy.

In many parts of the world, people are consuming an average of more than 500 calories per day from added sugar alone.”

The paper considered strategies to reduce public consumption of sugar. Based on public health experience with tobacco and alcohol, the authors did not place much faith in the effects of publicity and education.

They recommended instead that governments consider interventions to curb the availability of sugar, strategies like sugar taxes, placing age-limits on food purchases and limiting advertising of sugar sweetened substances.

They proposed, specifically, “adding taxes to processed foods that contain any form of added sugar. This would include sweetened fizzy drinks, other sugar-sweetened beverages and sugared cereals.”

These measures may seem fanciful and they attracted some ridicule and criticism. They are not, however, beyond the pale. Indeed they have been under consideration in several parts of America. Some school districts have banned the sale of soda in schools and some cities have banned the sale of fizzy drinks in public buildings. Initiatives to curb sugar consumption are even being rolled out at state level.

More than half of adults in New York are obese or overweight. A third of New Yorkers drink one or more sugary drinks a day. A few weeks ago, the Mayor of New York made headlines with his proposal to ban the sale of fizzy drinks larger than 16 ounces in restaurants, delis, sports arenas and cinemas.

Disney has also announced publicly that it will phase out advertisements of certain products on its (child-oriented) TV channels by 2015. American society has become ‘obesogenic’ according to the US Centers for Disease Control and Prevention.

According to their data, portion sizes for popular fast food items in the USA have increased dramatically since the 1950s. The weight of the average burger has tripled and fizzy drinks are six times the size they were then.

A can of fizzy drink contains about eight teaspoons of sugar.  This is a fairly timeworn statistic now and may shock few. However, perhaps a few others will place it in context. First, in the entire blood supply of a human there is about a teaspoon of sugar at any time. If your sugar level rises to say a tablespoon of sugar, you die. I

n order to avert this, the body must release insulin to reduce the levels of sugar in the blood. Second, a century ago, the average American consumed about 15g of fructose a day, mostly from fruit and vegetables.

S/he now consumes four or five times that amount daily mainly from sweetened foods and beverages such as breakfast cereals, sodas and fruit drinks. Third, the average American now consumes about 600 cans of carbonated beverages a year or more than a gallon a week.

In several lectures (on You Tube), Lustig explains the science behind his theories and his call for curbs on sugar consumption. In a nutshell, whereas the body, and every cell in it, can metabolize glucose from food, only the liver can derive energy from fructose. The liver can process fructose in fruit because the fibre in the fruit slows down absorption of fructose. However processed food has its fibre removed.

Our bodies simply cannot process the type and volume of fructose we consume in processed foods and beverages. A surfeit of fructose in the liver causes tiny fat droplets to accumulate in liver cells, elevates triglycerides, increases bad cholesterol, increases blood pressure, promotes the build-up of fat around the organs and makes tissues insulin-resistant, a precursor to diabetes.

As Lustig explained in a radio interview, “our current food supply is so glutted with fructose, that is added sugar, sugar that was put there very specifically for the food industry’s purposes, both for palatability and shelf life, that it has now created a toxic side effect in our livers, driving all of these chronic metabolic diseases. And the only thing that can reverse this is reduction in consumption.”

Our sugar consumption is too high and contributes to a host of chronic diseases. We can, as a nation, debate the type of interventions that should be made and how appropriate and effective some of them might be.

Education and public awareness programmes about the consequences may not be enough. Studies of eating behaviour suggest that consumers anywhere require little persuasion to overeat; as one commentator put it, “just barrage us with advertising, put food within arm’s reach, make food available 24/7, make it cheap and serve it in enormous portions.”

We are sleep-walking into a crisis of public health. We have insufficient data to chart the process as clearly as the Americans but our statistics show that chronic non-communicable diseases account for half of all deaths in Guyana and over four-fifths of all deaths among women here.

Lustig distilled his advice into three words: “Eat real food.” We used to, once.