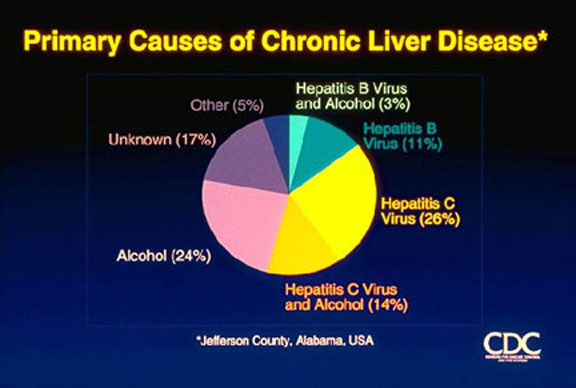 Therapy consists of sodium restriction, diuretics, and complete abstention from alcohol. Patients with ascitic fluid polymorphonuclear leukocyte counts of 250 cells per mm3 or greater should receive empiric prophylaxis against spontaneous bacterial peritonitis with cefotaxime and albumin.

Treatment of hepatic encephalopathy is directed toward improving mental status levels with lactulose; protein restriction is no longer recommended.

Patients with cirrhosis and evidence of gastrointestinal bleeding should undergo upper endoscopy to evaluate for varices. Endoscopic banding is the standard treatment, but sclerotherapy with vasoconstrictors (e.g., octreotide) also may be used. Prophylaxis with propranolol is recommended in patients with cirrhosis once varices have been identified.

Transjugular intrahepatic portosystemic shunt has been effective in reducing portal hypertension and improving symptoms of hepatorenal syndrome, and can reduce gastrointestinal bleeding in patients with refractory variceal hemorrhage. When medical therapy for treatment of cirrhosis has failed, liver transplantation should be considered.

Survival rates in transplant recipients have improved as a result of advances in immunosuppression and proper risk stratification using the Model for End-Stage Liver Disease and Child-Turcotte-Pugh scoring systems. (Am Fam Physician 2006;74:767-76, 781. Copyright © 2006 American Academy of Family Physicians.)

Ascites is defined as the pathologic accumulation of fluid in the peritoneal cavity. Approximately 85 percent of patients with ascites have cirrhosis, and the remaining 15 percent have a nonhepatic cause of fluid retention.

The American Association for the Study of Liver Diseases recommends a diagnostic abdominal paracentesis be performed and ascitic fluid obtained from patients with clinically evident ascites.3 Paracentesis with ascitic fluid culture in blood culture bottles should be performed before the initiation of antibiotics to determine a true infection.

First-line treatment of patients with cirrhotic ascites consists of sodium restriction (i.e., no more than 2,000 mg per day) and diuretics (e.g., oral spironolactone Aldactone and furosemide Lasix), as well as complete abstention from alcohol.

Propranolol (Inderal) at a dosage of 40 mg twice daily is recommended for pharmacologic prophylaxis of variceal bleeding, increasing to 80 mg twice daily if necessary or a dosage titrated to a 25 percent reduction in pulse rate.

An early referral to a transplant subspecialist is recommended for potential transplant recipients to allow time for patients, families, referring physicians, and transplant centers to meet and identify any potential problems.

The initial laboratory investigation of ascitic fluid should include a differential leukocyte count, a total protein level, and a serum-ascites albumin gradient (SAAG). The SAAG is a useful prognosticator of portal pressure; it is calculated by subtracting the ascitic albumin concentration from the serum albumin concentration obtained on the same day.

If the SAAG is 1.1 g per dL (11 g per L) or greater, there is a high likelihood of portal hypertension; if it is less than 1.1 g per dL, other causes of ascites should be explored, including peritoneal carcinomatosis, tuberculous peritonitis, and pancreatic ascites.

First-line treatment of patients with cirrhotic ascites consists of sodium restriction (i.e., no more than 2,000 mg per day) and diuretics (e.g., oral spironolactone Aldactone, furosemide Lasix), as well as complete abstention from alcohol. Fluid restriction is unnecessary unless serum sodium is less than 120 to 125 mEq per L (120 to 125 mmol per L). Patients who are sensitive to diuretics should be treated with sodium restriction and oral diuretics rather than with serial paracenteses, unless the ascites is refractory to these therapies or infection is suspected.

Treatment of Complications of Cirrhosis

400 mg orally per day for prophylaxis3

4 to 12 g orally per day divided every six to eight hours; can be added to lactulose in patients who are refractory to lactulose alone

†-Patients who survive an episode of spontaneous bacterial peritonitis should receive long-term prophylaxis with norfloxacin or trimethoprim/sulfamethoxazole.

Oral ofloxacin (Floxin; 400 mg twice daily) is an alternative to intravenous medications in patients without vomiting, shock, severe hepatic encephalopathy, or a creatinine level greater than 3 mg per dL (265 µmol per L).

Patients with ascitic fluid PMNL counts less than 250 cells per mm3 and signs and symptoms of infection should receive empiric antibiotic therapy while awaiting culture results.3 Patients who survive an episode of spontaneous bacterial peritonitis should receive long-term prophylaxis with norfloxacin (Noroxin) or trimethoprim/sulfamethoxazole (Bactrim, Septra). Patients with gastrointestinal hemorrhage and cirrhosis should receive norfloxacin or trimethoprim/sulfamethoxazole twice daily for seven days (the drug is then discontinued).3

Hepatic (portosystemic) encephalopathy represents a potentially reversible decrease in neuropsychiatric function caused by acute and chronic liver disease, occurring predominantly in patients with portal hypertension. The onset often is insidious and is characterized by subtle and sometimes intermittent changes in memory, personality, concentration, and reaction times. Hepatic encephalopathy is a diagnosis of exclusion; therefore, all other etiologies of altered mental status must be effectively ruled out.

Treatment goals for hepatic encephalopathy include provision of supportive care, identification and removal of precipitating factors, reduction in the nitrogenous load from the gut, and optimization of long-term therapy.

Therapy should be directed toward improving mental status via bowel cleansing with lactulose orally or with enemas.

One randomized trial demonstrated that diets with normal protein content can be followed safely during episodic hepatic encephalopathy caused by cirrhosis, and that protein restriction has no beneficial effect during such episodes.

In patients who are refractory to lactulose alone, neomycin can be added.

Identify and correct the precipitating causes:

1. Use nasogastric lavage, lactulose, and/or other cathartics or enemas to remove source of ammonia from colon.

2. Initiate treatment with lactulose or lacitol to produce two to four bowel movements per day.

4. Consider treatment with flumazenil (Romazicon) or another benzodiazepine receptor antagonist.

Increases in the ratio of plasma aromatic amino acids to branched-chain amino acids as a consequence of hepatic insufficiency also may contribute to encephalopathy. One meta-analysis suggested that mental recovery was consistently more rapid in patients whose treatment included a branched-chain amino acid infusion; three studies found lower mortality rates in patients who received this treatment, and two others suggested that the treatment increased mortality.

Another physiologic theory of hepatic encephalopathy is that endogenous benzodiazepines may bind to g-aminobutyric acid receptors and exert neuroinhibitory effects. Use of the benzodiazepine receptor antagonist flumazenil (Romazicon) may improve mental status transiently, whereas bromocriptine (Parlodel) may improve extrapyramidal symptoms.

No formal recommendation for the routine use of any of these agents has been suggested.

Regardless of the etiology of cirrhosis, the development of portal hypertension is nearly universal and results from an increased resistance to portal flow secondary to scarring, narrowing, and compression of the hepatic sinusoids. When the portal pressure exceeds a certain threshold, it results in the development of varices. Approximately 50 percent of patients with cirrhosis develop varices, most commonly in the distal 2 to 5 cm of the esophagus.

Variceal hemorrhage is defined as bleeding from an esophageal or gastric varix at the time of endoscopy, or the presence of large esophageal varices with blood in the stomach and no other recognizable source of bleeding.9 The rate of variceal bleeding is approximately 10 to 30 percent per year.

The British Society of Gastroenterology guidelines for the management of variceal hemorrhage recommend that patients with cirrhosis who present with evidence of upper gastrointestinal bleeding undergo an urgent upper endoscopic evaluation.

Primary prophylaxis of variceal bleeding is aimed at reducing the portal pressure gradient, azygous blood flow, and variceal pressure. These guidelines also suggest that the most effective pharmacotherapy is propranolol (Inderal) at a dosage of 40 mg twice daily, increasing to 80 mg twice daily if necessary.

If propranolol is contraindicated or not tolerated, isosorbide mononitrate (Ismo) at a dosage of 20 mg twice daily is the treatment of choice.9 Studies conducted since these guidelines have titrated the dosage of propranolol based on a reduction of the pulse rate by 25 percent.

If banding is difficult because of continued variceal bleedingoscopic sclerotherapy with vasoconstrictors (e.g., octreotide Sandostatin) or a Sengstaken-Blakemore tube insertion (with adequate airway protection) may be used until TIPS or surgical treatment can be arranged.

TIPS has been shown to improve outcomes and is more cost-effective than endoscopic band ligation in reducing variceal bleeding, but it is associated with a higher risk of encephalopathy.

This treatment option should be performed in medical centers with particular expertise. TIPS has been shown to reduce portal hypertension and can be effective in converting patients with diuretic-resistant ascites to diuretic-sensitive ascites, as well as reducing gastrointestinal bleeding in patients with refractory variceal hemorrhage. Evidence regarding whether or not TIPS improves survival is conflicting.

Compared with large-volume paracentesis plus albumin, TIPS improves survival without liver transplantation in patients with refractory or recidivant ascites.17

A retrospective study showed that in-hospital mortality of patients with cirrhosis and variceal bleeding decreased from 43 percent in 1980 to 15 percent in 2000, in concurrence with an early and combined use of pharmacologic and endoscopic therapies and short-term antibiotic prophylaxis.

Hepatorenal syndrome is defined as functional renal failure in cirrhotic patients in the absence of intrinsic renal disease.20 It is characterized by sodium and water retention in patients with renal vasoconstriction, resulting in decreased renal blood flow, glomerular filtration rate, and urinary output, which contribute to azotemia.

One prospective study of 229 patients with cirrhosis and ascites who did not have azotemia found an incidence of hepatorenal syndrome of 18 percent after one year and 39 percent after five years.

The pathogenesis of hepatorenal syndrome is not completely understood, but it is likely the result of an extreme underfilling of the arterial circulation secondary to arterial vasodilation in the splanchnic circulation.

Although hepatorenal syndrome can occur with most forms of severe hepatic disease, patients with primary biliary cirrhosis appear to be relatively protected.

No sustained improvement in renal function after diuretic withdrawal and volume expansion with 1.5 L isotonic saline

Proteinuria < 0.5 g per dL (5 g per L) and no ultrasonographic evidence of obstruction or parenchymal renal disease

This form of hepatorenal syndrome usually is precipitated by spontaneous bacterial peritonitis and occurs in approximately 25 percent of patients with spontaneous bacterial peritonitis, even with the clearance of infection. The median survival duration of these patients is less than two weeks without treatment, and almost all patients die within 10 weeks after the onset of renal failure.

Patients with type 2 hepatorenal syndrome exhibit moderately increased serum creatinine levels above 1.5 mg per dL (133 µmol per L) that remain stable over a longer period, and ascites that generally is resistant to diuretics. The median survival duration in these patients is three to six months.24

Hemodialysis often is used to control azotemia in hepatorenal syndrome and to correct electrolyte imbalances. Nonsteroidal anti-inflammatory drugs and potentially nephrotoxic medications should be avoided. One controlled trial demonstrated a substantial improvement in renal plasma flow, glomerular filtration rate, and urinary sodium excretion in patients with type 1 hepatorenal syndrome after 20 days of treatment with oral midodrine (ProAmatine) and parenteral octreotide compared with the use of nonpressor dose dopamine.

These therapies also appear to improve survival rates and may serve as a bridge to liver transplantation. In the futureothelins, adenosine antagonists, long-acting vasoconstrictors, and antileukotriene antagonists may play a role in preventing and treating hepatorenal syndrome.