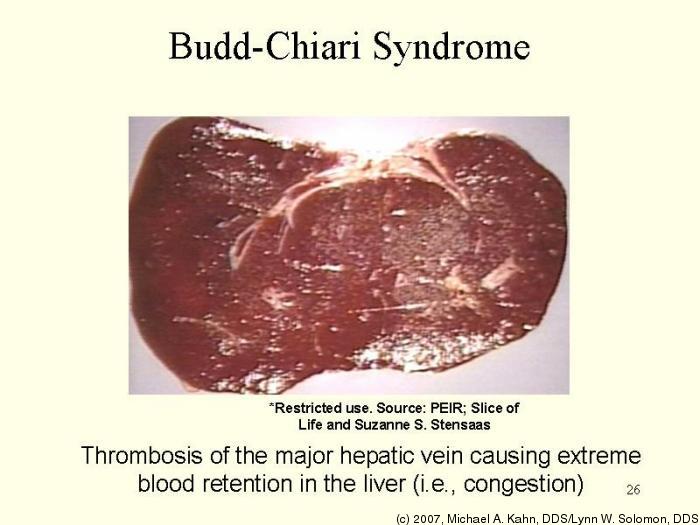 Budd-Chiari syndrome is caused by blood clots that completely or partially block the large veins that carry blood from the liver (hepatic veins) into the inferior vena cava.

Some people have no symptoms, but others experience fatigue, abdominal pain, nausea, and jaundice.
Fluid may accumulate in the abdomen, the spleen may enlarge, and sometimes severe bleeding occurs in the esophagus.
Doppler ultrasonography can detect narrowed or blocked veins.
Drugs may be used to dissolve or decrease the size of the clot, or a connection may be made between veins to allow blood to bypass the liver.

Budd-Chiari syndrome usually occurs when a clot narrows or blocks the hepatic veins.

Because blood flow out of the liver is impeded, blood accumulates in the liver, causing it to enlarge. The spleen may also enlarge. The backup of blood (congestion) in the hepatic veins causes blood pressure in the portal vein to increase. This increased pressure, called portal hypertension, can result in dilated, twisted (varicose) veins in the esophagus (esophageal varices).

Portal hypertension, plus the engorged and damaged liver, leads to fluid accumulating in the abdomen, a condition termed ascites. The kidneys contribute to the problem by causing salt and water to be retained.

The clot may extend to also block the inferior vena cava (the large vein that carries blood from the lower parts of the body, including the liver, to the heart). Varicose veins in the abdomen near the skin’s surface may develop and become visible.

Usually, the cause is a disorder that makes blood more likely to clot, such as the following:

Other causes include disorders that develop near the hepatic veins, such as parasitic infections and liver or kidney tumors that press on or invade the veins.

In Asia and South Africa, the cause is commonly a membrane (web) that blocks the inferior vena cava. Often, the cause is unknown.

Symptoms vary somewhat depending on whether they appear suddenly or develop more slowly.

Fluid may accumulate in the legs, causing swelling (edema), or in the abdomen, causing ascites. Varicose veins in the esophagus can rupture and bleed, sometimes profusely. People may vomit blood. Such bleeding is a medical emergency.

If cirrhosis develops, it can lead to liver failure with deterioration of brain function (hepatic encephalopathy), resulting in confusion and even coma.

Sometimes symptoms begin suddenly, such as hepatic vein thrombosis during pregnancy. In this case, people feel tired, and the liver is enlarged and tender. Abdominal pain occurs in the upper abdomen. Additional symptoms include vomiting and a yellow discoloration of the skin and whites of the eyes—a condition called jaundice. Liver failure infrequently develops.

Doctors suspect the Budd-Chiari syndrome in people with either of the following:

An enlarged liver, ascites, liver failure, or cirrhosis when there is no obvious cause, even after testing
Abnormal results of blood tests done to evaluate liver function plus conditions that increase the risk of blood clots

If surgery is planned, venography is necessary. For this procedure, x-rays of the veins are taken after a radiopaque dye (which is visible on x-rays) is injected into a vein in the groin.

A liver biopsy may be done to confirm the diagnosis and identify if cirrhosis has developed.

When the vein remains completely blocked, most people, if untreated, die of liver failure within 3 years. When the blockage is incomplete, life expectancy is longer but varies.

Treatment depends on how rapidly the disorder has developed and how severe it is.

When symptoms begin suddenly and the cause is a clot, fibrinolytic (thrombolytic) drugs, which dissolve clots, help. On a more long-term basis, anticoagulant drugs prevent clots from enlarging or recurring.

If a vein is narrowed or blocked by a web, angioplasty may be done to widen it. For this procedure (called percutaneous transluminal angioplasty), a catheter with a deflated balloon at its tip is inserted through the skin into a blood vessel (such as the femoral vein in the groin) and threaded to the blocked vein.

The balloon is inflated, widening the vein. A wire mesh tube (stent) is then inserted and left in place to keep the vein open.

Another solution is to create an alternate route for blood flow, bypassing the liver. This procedure, called transjugular intrahepatic portal-systemic shunting (TIPS), reduces pressure in the portal vein. For the procedure, a local anesthetic is used to numb the neck, and a catheter with a cutting needle is inserted into a vein in the neck (jugular vein).

The catheter is threaded through the inferior vena cava to the hepatic vein.

The needle is used to create a connection (called a shunt) between two veins, usually a branch of the hepatic vein and the portal vein, so that blood can bypass the liver.

Then, an expandable metal tube (stent) is threaded to and placed in the shunt to keep it open. The shunt enables blood to bypass the liver, flowing from the portal vein (which normally brings blood to the liver) directly to the hepatic veins (which drain blood away from the liver).

The blood returns to the heart through the inferior vena cava. However, such shunts increase the risk of hepatic encephalopathy (deterioration of brain function due to liver dysfunction). Also, shunts occasionally become blocked, especially in people who have a tendency to form blood clots.

Liver transplantation can be life-saving, particularly for people with severe liver failure.

Problems resulting from the disorder are also treated:

Bleeding from varicose veins in the esophagus: Several techniques can be used to stop the bleeding. Usually, rubber bands are inserted through a flexible viewing tube (endoscope), placed through the mouth into the esophagus. The bands are used to tie off the varicose veins (termed ligation).
Fluid accumulation in the abdomen: A low-salt (sodium) diet and diuretics can help prevent too much fluid from accumulating in the abdomen.

Most people need to take anticoagulants indefinitely to prevent new blockages from developing.