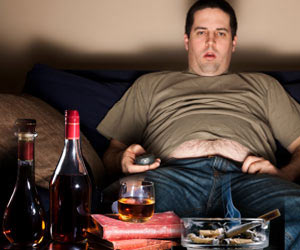 Two newly published prospective, randomized clinical research studies from the United Kingdom further suggest that increased alcohol intake in the presence of obesity significantly increases the risk of chronic liver disease, and premature death related to chronic liver disease.  Both of these studies appear in the current issue of the British Medical Journal.

In the first study, more than 1.2 million women (average age was 56 years) were recruited between 1996 and 2001.  In this Million Woman Study, after an average duration of follow-up of 6.2 years, 1,811 women were either admitted to a hospital with a new diagnosis of cirrhosis, or died of cirrhosis.

Based upon the extensive health data collected from all of the participants in this enormous public health study, both obesity and alcohol intake were proportionally linked to an increased risk of cirrhosis, as well as death due to cirrhosis.  (Note: a standard glass of wine, mixed drink, or beer contains about 0.6 ounces, or 14 grams, of alcohol.)

For every 5 units of BMI above 22.5, the relative risk of cirrhosis increased by 28 percent (BMI is a standard measure of body fat content that is adjusted for height and weight).  Among women who reported the consumption of less than 70 grams of alcohol per week (equivalent to 5 alcoholic drinks per week), the absolute risk of developing cirrhosis, over a period of 5 years, was 20 percent higher in women with a BMI of 30 or more, when compared to non-obese women with normal BMIs (“obesity” is defined as a BMI of 30, or greater; while being “overweight is defined as having a BMI of 25 or greater, but less than 30).

Among the women who reported consuming 150 grams or more of alcohol per week (which is equivalent to 11 or more alcoholic drinks per week), a normal BMI was associated with a 170 percent increase in the absolute risk of developing cirrhosis, while obese women (with a BMI of 30 or greater) who consumed 150 grams or more of alcohol per week experienced a whopping 400 percent increase in the risk of developing cirrhosis!

In the second published study in the British Medical Journal, data from two prospective clinical studies was analyzed.  A total of 9,559 men participated in these prospective public health studies, with a highly impressive median follow-up of 29 years.  These nearly 10,000 male study participants were divided into separate study groups based upon their measured BMI and their self-reported alcohol intake.

During nearly 3 decades of observation, 80 (0.8 percent) of these male research volunteers died directly due to chronic liver disease, while another 146 (1.5 percent) died of multiple causes, but with liver disease as a contributing cause of death.

Based upon this data, the researchers conducting this study were able to determine that there was a synergistic, enhanced risk of dying from liver disease when alcohol intake was present in addition to being overweight or obese.  This “relative excess risk” due to an interaction between alcohol intake and increasing BMI amounted to 4 times the relative risk of simply adding the individual liver disease risks of increased BMI and alcohol intake.

Moreover, the combination of obesity and increased alcohol intake appears to be a particularly severe risk factor for the development of chronic liver disease, and for death due to liver disease.

Therefore, in addition to the multiple other health risks associated with obesity and excessive alcohol intake, the results of these two studies should cause all of us to reexamine our lifestyle and dietary habits in our pursuit of better health and greater longevity.

Posted in Ad-Hoc Articles and tagged alcohol, liver disease, obesity
← New Research Changes the Perception of Statins and Liver DiseasePregnancy and The Liver →