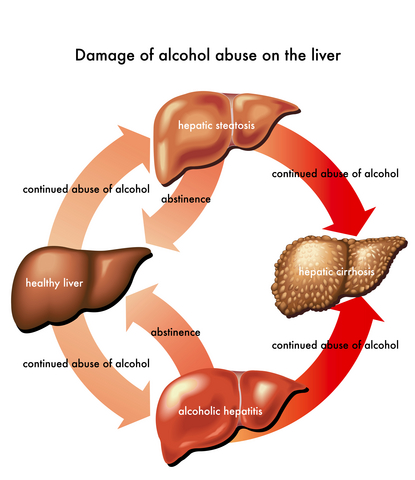 How alcohol damages your liver

Drinking too much alcohol can have serious consequences for your health, especially your liver, which is involved with detoxification of the body after excessive alcohol intake.

The controversy linked to alcohol intake has been raging for many years: on the one hand, alcohol when used in moderation, can help people to relax and has recently been found to lower the risk of mortality; on the other hand soaring statistics of alcoholism and all its attendant ills, particularly in a country such as South Africa, paint a scary picture of “demon drink”.

A report published in the American Journal of Clinical Nutrition in 2011 by Akbaraly and his coworkers at the University College, and the Imperial College in London, as well as the University of Montpellier and other research organisations in France, showed that “Consumption of nuts and soy and moderate alcohol intake appeared to be the most important independent contributors to decreased mortality death risks”. The authors pointed out that moderate alcohol consumption is also part of the Mediterranean Diet , which is becoming increasingly popular worldwide to combat most diseases that plague populations with a Western dietary intake.

The dire consequences of excessive alcohol intake as practised by so many people throughout the world and also in South Africa, are listed below.

Excessive alcohol intake has many dire social and medical consequences, including trauma, abuse, loss of income and a wide spectrum of disease conditions. For today, we will concentrate on those conditions which affect the liver. The liver is the one organ in the body that is most intimately involved with the detoxification of the body after excessive alcohol intake, and it is, therefore, the organ that often suffers the most damage.

This is probably the most common manifestation of liver disease in many countries where alcohol is consumed in excessive quantities. A toxic byproduct of excessive alcohol intake, is acetaldehyde which causes damage to the structure and function of the mitochondria in human body cells, particularly in the liver ( Mahan et al, 2011).

Genetic variations or polymorphisms of the enzymes that metabolise alcohol in the body
Gender – women are more vulnerable to alcoholic liver disease than men
Simultaneous exposure to drugs that can harm the liver
Infections with viruses that attack the liver
Poor dietary status, which is often associated with high alcohol intakes (see below).

Each one of these stages is characterised by many and varied metabolic disturbances, such as:

Fat deposition in the cells of the liver in Stage 1 – this dire consequence of excess alcohol intake can be reversed provided the patient stops drinking.

Despite the severity of these symptoms, total abstinence and nutritional support can resolve Stage 2 symptoms and permit the patient to lead a normal life again, but without ever drinking alcohol again.

Once Stage 3 of alcoholic liver disease is reached, the prognosis becomes serious. Additional symptoms to those of Stage 2, such as bleeding from the digestive tract, encephalopathy (a reversible change in mental status when toxins are not filtered and removed properly by the liver), portal hypertension (increased blood pressure in veins that drain blood from the liver, because the blood flow through the liver is blocked), and ascites (accumulation of fluid, proteins and electrolytes such as sodium and potassium in the peritoneal cavity), are often present.

The prognosis of alcoholic liver disease after a patient has reached Stage 3 is to a great degree dependent on how much damage the liver has suffered, the type of nutritional and medical support the patient receives and total abstinence from all alcohol (Mahan et al, 2011).

In the above discussion, it was repeatedly mentioned that patients with alcoholic liver disease need nutritional support, which when coupled to total abstinence from alcohol may return even very sick patients to good health. The reason why nutritional support makes such a difference, is that most alcoholic suffer from extensive malnutrition . In most cases they are totally unaware of their malnourished state. According to Mahan and her coauthors (2011), the following nutritional deficiencies are associated with excessive alcohol intake:

Too little or too much energy – alcohol often replaces food in the diets of even moderate drinkers which can either lead to weight loss or weight gain. In heavy drinker who are addicted to alcohol, alcohol replaces nutrient-rich food which leads to deficiencies.
Poor protein absorption – because alcohol interferes with normal digestion and absorption, the liver is unable to absorb amino acids properly and can thus not produce all the proteins it, and the body require.
Fat metabolism is impaired and patients tend to deposit triglycerides in liver cells thus exacerbating the fatty liver condition.
Most alcoholic also develop insulin resistance and do not metabolise carbohydrates efficiently.
Probably the most serious and dramatic nutritional insults suffered by alcoholics, are vitamin and mineral deficiencies. Thiamine or vitamin B1 deficiency is the most common vitamin deficiency in alcoholics and can cause so-called Wernicke encephalopathy. Severe vitamin A deficiency can also occur leading to night blindness. In addition, deficiencies of folic acid, vitamins B6, C, D, E and K are common. In regard to minerals, alcoholics may suffer from low calcium, magnesium, phosphate and zinc intakes.

It is evident from the above that moderate intake of alcohol can probably lower the risk of mortality, but that the moment this moderate intake increases to excessive levels, alcohol literally becomes “poisonous” and can do our bodies, especially the liver, great harm.

If you have been diagnosed with any symptoms related to alcoholic liver disease, stop drinking alcohol immediately, follow the instructions of your physician andconsult a registered dietician urgently. The dietician will help you redress your nutritional deficiencies and provide you with an individual diet prescription that is tailored to your specific condition, the severity of your symptoms and the amount of damage your liver has suffered.

Alcoholic liver disease is one of the many negative consequences of excessive alcohol intake, so if you suspect that your moderate drinking is getting out of control, get help fast before you do irreparable damage to your liver.