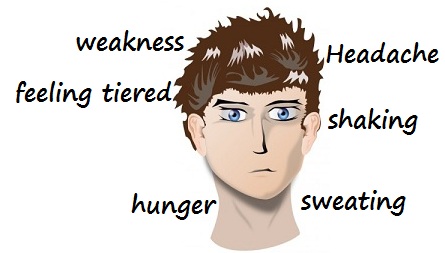 What is Reactive Hypoglycemia?

Hypoglycemia occurs when your blood sugar (glucose) level falls too low. There are several reasons why this may happen, the most common being a side effect of drugs used for the treatment of diabetes.

But to understand how hypoglycemia happens, it helps to know how your body normally regulates blood sugar production, absorption and storage.

During digestion, your body breaks down carbohydrates from foods — such as bread, rice, pasta, vegetables, fruit and milk products — into various sugar molecules. One of these sugar molecules is glucose, the main energy source for your body. Glucose is absorbed into your bloodstream after you eat, but it can't enter the cells of most of your tissues without the help of insulin — a hormone secreted by your pancreas.

When the level of glucose in your blood rises, it signals certain cells (beta cells) in your pancreas, located behind your stomach, to release insulin. The insulin, in turn, unlocks your cells so that glucose can enter and provide the fuel your cells need to function properly. Any extra glucose is stored in your liver and muscles in the form of glycogen. This process lowers the level of glucose in your bloodstream and prevents it from reaching dangerously high levels. As your blood sugar level returns to normal, so does the secretion of insulin from your pancreas.

Aside from your liver breaking down glycogen into glucose, your body also has the ability to manufacture glucose in a process called gluconeogenesis. This process occurs primarily in your liver, but also in your kidneys, and makes use of various substances that are precursors to glucose.

If you have diabetes, the effects of insulin on your body are drastically diminished, either because your pancreas doesn't produce enough of it (type 1 diabetes) or because your cells are less responsive to it (type 2 diabetes). As a result, glucose tends to build up in your bloodstream and may reach dangerously high levels. To correct this problem, you likely take insulin or other drugs designed to lower blood sugar levels.

If you take too much insulin relative to the amount of glucose in your bloodstream, it can cause your blood sugar level to drop too low, resulting in hypoglycemia. Hypoglycemia may also result if, after taking your diabetes medication, you don't eat as much as usual (ingesting less glucose) or you exercise more (using up more glucose) than you normally would. To prevent this from happening, it's likely that your doctor will work with you to find the optimum dosage that fits your regular eating and activity habits.

Hypoglycemia in people without diabetes is much less common. Causes may include the following:

Taking someone else's oral diabetes medication accidentally is a possible cause of hypoglycemia. Other medications may cause hypoglycemia, especially in children or in people with kidney failure. One example is quinine, which is used to treat malaria.

Drinking heavily without eating can block your liver from releasing stored glucose into your bloodstream, causing hypoglycemia.

Severe illnesses of the liver, such as severe hepatitis, can cause hypoglycemia. Disorders of the kidney, which can keep your body from properly excreting medications, can affect glucose levels due to a buildup of those medications. Long-term starvation, as may occur in the eating disorder anorexia nervosa, can result in the depletion of substances your body needs in gluconeogenesis, causing hypoglycemia.

A rare tumor of the pancreas (insulinoma) may cause overproduction of insulin, resulting in hypoglycemia. Other tumors may result in excessive production of insulin-like substances. Or the tumors themselves may use up too much glucose. Enlargement of beta cells of the pancreas that produce insulin (nesidioblastosis) may result in excessive insulin release, causing hypoglycemia. People who've undergone gastric bypass surgery are at risk of this condition.

Certain disorders of the adrenal glands and the pituitary gland can result in a deficiency of key hormones that regulate glucose production. Children with these disorders are more prone to hypoglycemia than are adults.

If you ignore the symptoms of hypoglycemia too long, you may lose consciousness. That's because your brain needs glucose to function properly.

Death, primarily in those with diabetes

On the other hand, if you have diabetes, be careful not to overtreat your low blood sugar. If you do, you may cause your blood sugar level to rise too high. This, too, can be dangerous and may cause damage to your nerves, blood vessels and various organs.